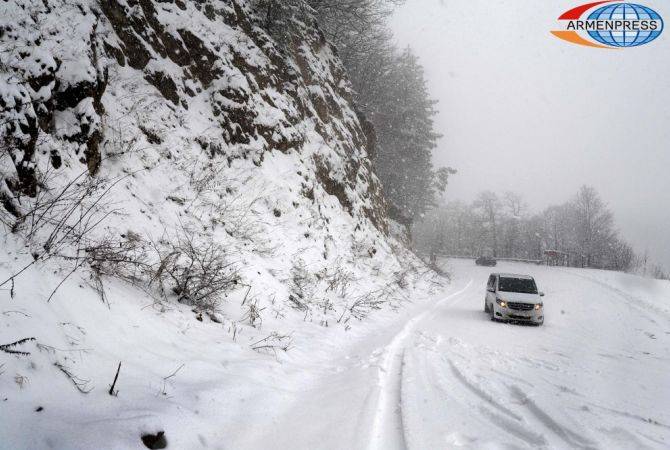 
YEREVAN, JANUARY 16, ARMENPRESS. The Vardenyats Pass and the Verin Getashen-Madina road are closed for traffic, the Ministry of Emergency Situations said in a daily weather and roads update at 08:00.

The Sotk-Karvajar road and the Sisian-Goris road are difficult to pass due to a blizzard.

Authorities cautioned drivers on clear ice on the roads of the Ashotsk and Amasya regions of Shirak province and the Sevan-Gavar-Martuni road in Gegharkunik province.

Snowfalls are reported in Syunik province.

According to Georgian transportation authorities the Stepantsminda-Lars road has been shut down amid an avalanche risk.

The Stepantsminda-Lars road is the only land connection between Armenia and Russia, which runs through Georgia. Stepantsminda is a small town in north-eastern Georgia. The road is used for both passenger and cargo transportations and is of major significance. Vehicles pass through the Verkhni (Upper) Lars customs checkpoint into Russia. Temporary brief shutdowns are usual during winter seasons because of weather conditions.

Located on an elevation of 2410 meters in Armenia’s Gegharkunik Province, the Vardenyats Pass is a mountain pass in the eastern section of the Vardenis mountain range, where the Martuni-Yeghegnadzor highway passes through. The 14th century Selim Caravanserai is located here.