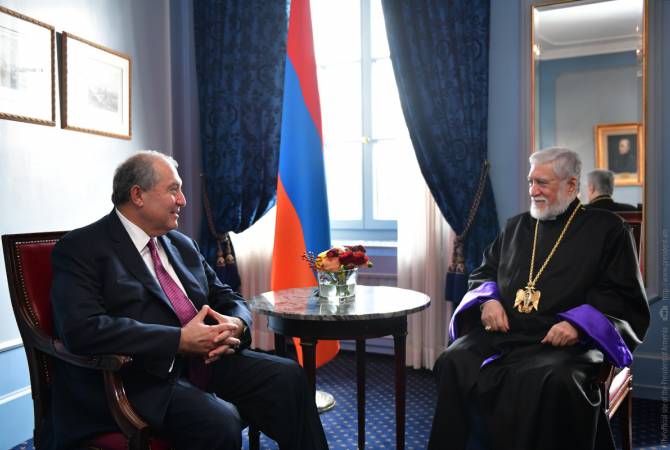 
YEREVAN, DECEMBER 10, ARMENPRESS. His Holiness Aram I, Catholicos of the Great House of Cilicia, sent a letter to President of Armenia Armen Sarkissian welcoming the elections of the new National Assembly, reports Armenpress.

His Holiness Aram I called the December 9 a significant day for Armenia. “Our people have expressed their collective will by electing a new National Assembly for the sake of free, democratic and powerful Armenia. The people’s will is also a fair expectation to have a homeland where justice, economic development, improvement of people’s living standards, guarantee of pluralism by law, strengthening of rule of law are transformed into transparent processes.

In the foreign front the strengthening of Artsakh’s independence, our people’s demand for recognition and reparation of the Armenian Genocide, as well as the expansion of circle of our friends and partners of the East and the West must confidently have a priority place in Armenia’s diplomatic relations’ agenda”, the letter says.

Catholicos Aram I said the Diaspora, as part of the Armenia world, in addition to the role of philanthropist and investor, must also participate in the discussion of pan-Armenians agendas and decision-making processes.

“We believe that we can guide Armenia to further strengthening with such works and programs and committed participation of our people, with its healthy economy, strong Army and state structures. I warmly congratulate our lovely people. May God keep and hold firm our homeland”, the letter said.