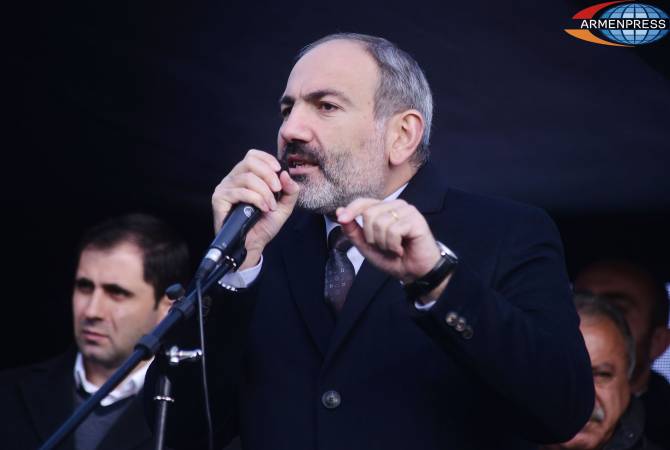 
YEREVAN, NOVEMBER 26, ARMENPRESS. The Republic of Armenia will again become an industrial country in case of our victory in the early parliamentary elections, acting Prime Minister Nikol Pashinyan said during the election campaign of Im Kayl (My Step) alliance in Talin town, reports Armenpress.

“We will take measures to again make Armenia an industrial country. The first home appliance factory will open in December in the history of our newly-independent history, which will produce TV for instance. I met with an ethnic Armenian investor three days ago who has three factories in three places in the world. He told me that he plans to visit Armenia and set up a factory in the homeland. Sugar plan will soon open in Sevan. If everything goes well, the image of our country’s economy will change in 2019”, Pashinyan said.

He added that they plan to make several reforms during 2019 in case of receiving the people’s trust vote. “We say that we are going to exempt the microbusiness from taxes totally. All structures operating in Talin town, the annual turnover of which doesn’t exceed 24 million AMD, will be exempt from taxes. And this is the outcome of our work promotion policy. We will exempt all individual taxi drivers from all types of taxes. Today in the province each taxi driver pays 8000 AMD monthly, we will exempt them from this tax since we are going to promote the work. We will introduce a point-based system for the drivers”, Pashinyan said, adding that their goal is to organize free and fair elections.

“Our goal is the following that the winner in all upcoming elections in Armenia must be one subject – the citizen of Armenia, because his/her vote will determine who is first, second and third. Not by threats, but by the free expression of the citizen’s will. The greatest result of our revolution is that we, in fact, eliminated the need for conducting revolutions in Armenia because you can do your revolution through your one ballot. The revolution took place because you were electing one, but another was being elected. The greatest outcome of the revolution must be that you do that revolution during each elections by your vote. I became a prime minister because you decided so, when you decide that I no longer need to be a PM, I will stop serving as a PM, this is the greatest result of the revolution. Power belongs to the people, we are just the authorized deputy of the people”, he said.

The snap parliamentary elections of Armenia will be held on December 9. The election campaign launched on November 26 and will end on December 7. 11 political forces are participating in the elections.