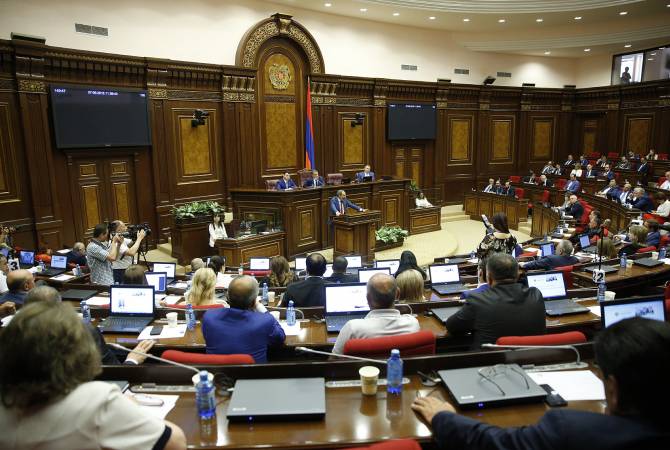 
YEREVAN, OCTOBER 24, ARMENPRESS. Acting PM Nikol Pashinyan doesn’t rule out being nominated in parliament for prime minister in the second round of vote also due next week.

“I don’t rule out being nominated, but I’m not saying for sure that I will be nominated”, he told reporters today in parliament after the first round of vote.

Pashinyan was the sole candidate in the election, or confirmation vote, today.

He himself urged MPs not to vote in favor of his candidacy in order to deliberately fail the election to pave way for eventual dissolution of parliament and early elections.

His nomination was a formality, and the down vote was also a formality.

The Armenian parliament is one step closer to being disbanded as it voted down Nikol Pashinyan’s candidacy today in the first round of electing a prime minister.

No one voted in favor, 1 MP voted against, and 11 lawmakers abstained.

53 votes are required to elect a prime minister.

The Yelk faction nominated incumbent acting Prime Minister Nikol Pashinyan’s candidacy as a formality in a pre-arranged scenario of not being elected in order to trigger the process of dissolution of parliament.

Pashinyan tendered a technical resignation on October 16 in order to launch the process of calling early elections.

Under the law, if a prime minister resigns lawmakers must elect a new PM within two weeks. If MPs fail to elect a PM during the first vote, a second round takes place a week later.

Prior to the vote, parliamentary factions must nominate candidates for the election. All factions agreed that they wouldn’t nominate anyone in order to pave way for dissolution. But the Yelk faction nominated incumbent Nikol Pashinyan in a technical maneuver because the Constitution says that a “vote” must take place. Lawmakers are expected to deliberately vote down Pashinyan in order to fail the election and head for eventual dissolution, and early elections.