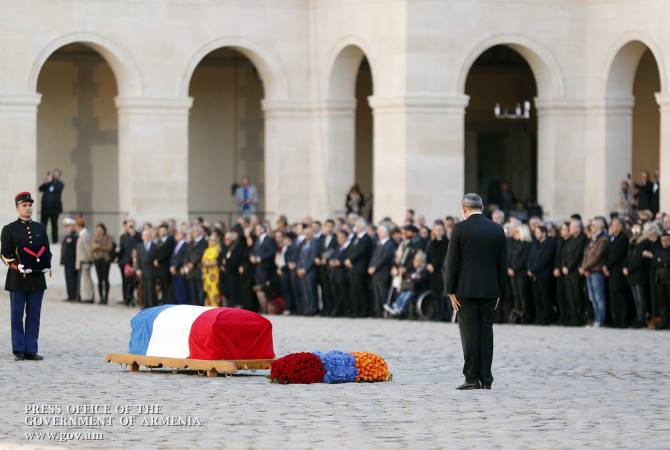 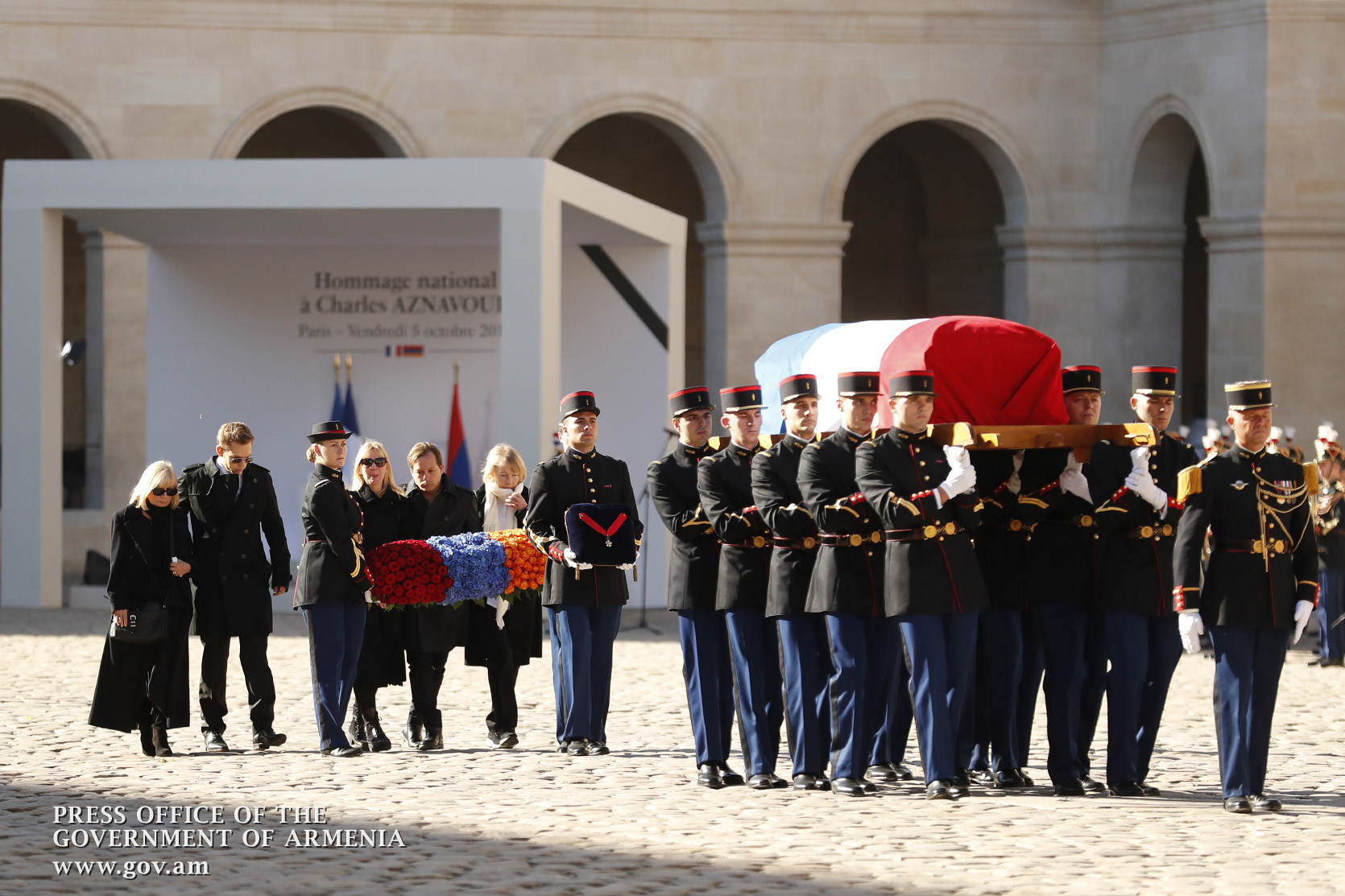 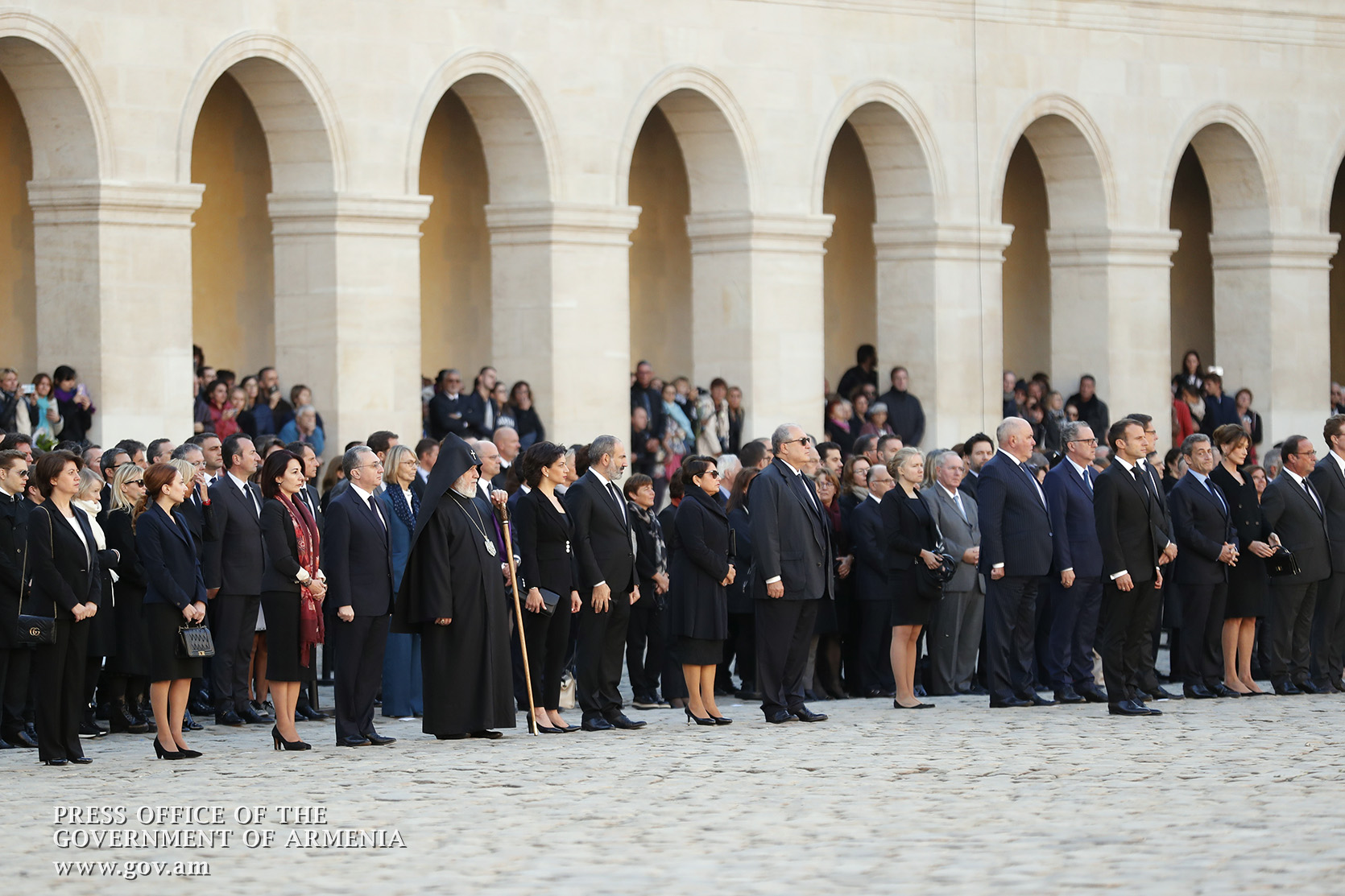 “We gathered today to bow and honor the great master of French chanson, Charles Aznavour. For eight decades this name has engraved smiles on millions of faces, has excited or calmed the breath of tens of millions, has injected glow in hundreds of millions of eyes.

And on October 1, 2018, this name stopped the world and international life for a moment, bringing an irreversible grief to the faces of hundreds of millions of people, publishing its last biggest poster in the headlines of leading newspapers of the world : « Charles Aznavour has died at the age of 94 ».

Charles Aznavour’s predecessors, surviving the Armenian Genocide, roamed worldwide and eventually settled in France, a country which gave shelter and hope to hundreds of thousands of Armenians, where Vaghinak Aznavour was born from, who then went on to become the great Charles Aznavour.

Bearing unimaginable difficulties, Vaghinak-Charles eventually found his calling, but no one else other than himself believed in this calling. Everyone was convincing him, explaining, that the stage isn’t his business, that singing isn’t his calling, that destiny in itself had been very generous toward him, by saving his parent from the disaster of genocide.

But Vaghinak Aznavuryan didn’t need compassion, but a mission, and he knew his mission and this mission was the unimaginable path of becoming Charles Aznavour. And he sang, he wrote, and he wrote and sang in empty and semi-empty halls and he sang tirelessly and without stopping and gave humanity time to understand and realize that a great star has originated in the skies of the global culture, which has yet to “blow up” the most prestigious concert halls of the world for several decades.

And his voice spread in all parts of the world, it reached the most remote countries and warmed up even the coldest hearts.

Unfortunately I did not manage to personally know the great master, Charles Aznavour. But believe me, I perceive him as my closest friend. Any Armenian perceives him this way, because Aznavour is the person who increased the name of Armenians to new heights, who gave new breath to the pride of Armenians, who was able to live with the pains, concerns and dreams of his historic homeland and his people.

This is also the reason that Charles Aznavour was awarded the title of National Hero of Armenia. But he earned this title not only with his genius of a chansonnier, but for the unforgettable contribution for the establishment of the Republic of Armenia.

Streets and Squares are named after him in Armenia, while his majestic statue rises for already many years in Armenia’s second city of Gyumri, and he is perhaps the only man for whom a statue was erected in Armenia in his living years.

During this monumental farewell ceremony of Charles Aznavour, I can’t not express the special respect and gratitude that our people have for your country. I would like to express the gratitude of the Armenian people to the French state and all French people for giving shelter to our people who survived the genocide and creating favorable environment for the development of Armenian talent.

Armenians of France have given names such as Charles Aznavour, Henri Verneuil, Georges Garvarentz, Jansem, Carzou  and France became a kind oasis of the rebirth of our people.

He was living with the concerns of Armenia, and our people saw and felt his care during the major earthquake which took place thirty years ago, during all the difficult years of Armenia’s independence.

Charles Aznavour also did not remain indifferent towards the non violent, velvet, democratic revolution which took place in Armenia, and in the last letter addressed to me he in part wrote : « As soon as my health will allow, I am planning to visit new Armenia and get to know the healthy forces which will develop the future of our nation. »

The great maestro was planning to visit Armenia next week, on the occasion of the 17th La Francophonie summit, and I promised him to introduce to New Armenia, I promised that he would instantly feel the optimism and spirit of the victorious citizens of New Armenia.

Unfortunately, I was unable to keep this promise, i regret, that nevertheless Aznavour managed to address his final message to New Armenia in the letter written to me, saying : I heartily want Armenia’s youth to be able to display its entire potential and make their dreams come true in Armenia.

In your letter, you accurately coined what the Armenian people want, what the Armenian youth wants. And now, here, in front of the entire world I want to solemnly promise to you, that we will make your dream come true. I would like to reassure that I am selflessly dedicated to the work which must make New Armenia the way you dreamt about it. Free and happy Armenia will truly be the worthy appreciation toward your unforgettable contribution towards the Armenian people and Armenia.

“Charles Aznavour wanted to live a century, he promised this to himself, he promised to us, as if it were the last challenge of his life. Age never deprived him from the insatiable thirst for life, the desire to create, love and sing, but he passed away few steps back from his goal.

This sudden emptiness made us understand an obvious thing, that for an entire century it was him that we lived through, at moments of hardships, bitterness and hope Charles Aznavour gave us the comforting mirror with his art, with which he mitigated our lives for many years, helped to withstand the challenges of life. His songs weren’t empty summer songs which would make people happy for a moment and then be forgotten, his songs became comfort, consolation for millions, he was singing for us as a life companion, telling about life’s difficulties. He was speaking about time in a unique way, his work didn’t only tell about sorrow, they were also presenting his experience of immigration and exile. They say that years of exile are calculated double, Frenchmen noticed this in him very quickly.

During the years Charles Aznavour’s voice has united us, regardless of our age and social status. Aznavour united us and become one of France’s faces. Aznavour’s songs are first of all poems, lyrics of which go into our hearts, the titles of these poems and chorus of the songs have become a legacy for us.

In this very way that establishes the genius of an artist. The French language became the source, connection for Aznavour which tied with France. The son of Armenian and Greek immigrants, who didn’t receive education, instinctively understood that language is a state within a state in France. The son of the actor became a Parisian, first began to appear in films, with difficulties, sometimes with short dialogues, but he never aspired to become an actor. Nevertheless he appeared in sixty films, many of which became masterpieces. He always stood by the youth, was open for new music, voices and ideas. He wrote for young artists until the end, he continued helping, supporting them, by this establishing bridges between generations. This is how he imagined France, because he knew to what extend France is connected to the entire world. He sang in eight languages, but served his songs to the public everywhere in French language.

From all missions he preferred loyalty. He was loyal to his parents, his wife, family, relatives, friends, acquaintances and strangers, he was also loyal to Armenia. Aznavour was the son of Armenia, the friend, ambassador, also the generous son who provided assistance to the victims of the 1988 earthquake.

This commitment of his is today continued by the Aznavour Foundation, for the benefit of Armenians, Armenia, France-Armenia friendship. Despite the pain that the genocide left, Aznavour continued his actions and developed his struggle. Aznavour always sang about Armenia, the Armenian people, wanting to protect the dignity of the people who were attempted to be silenced.

Remaining committed to his roots, he showed us the small part of foreign nation in his French soul. Thanks to him Armenia has given a lot to France. Through him today is an occasion to remember to what extend we, as a nation, owe to all those Armenians who were forced to leave their country and came to find shelter here. This is a common fate. Armenians of all countries, my thoughts are with you today.

Next week, Charles Aznavour had to be in Yerevan with us to participate in the La Francophonie summit, and his place will remain absent. Let the friendship between Armenia and France be worthy of the lessons he gave.

I am sure that for many years to come millions of people at times of hardships, hope and happiness will keep in their memory the music or lyrics of the songs which this exclusive artist has left us with. He will continue his path in the hearts of us all, walking ahead, with his hand in the pocket, a smile on his face, and together with us he will proudly pass this century. From now he will never leave us, because poets never die in France.”