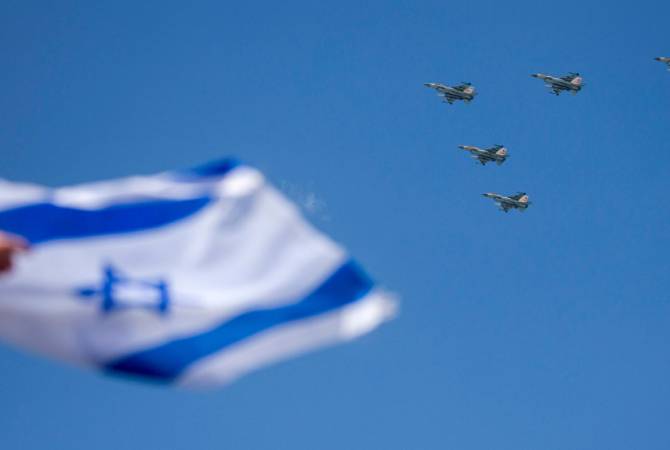 
YEREVAN, SEPTEMBER 18, ARMENPRESS. Israel has blamed the Syrian government for the downing of the Russian Il-20 military plane in Latakia province, according to an IDF (Israeli Defense Forces) statement, RT reports.

Israel said that it "expresses sorrow for the death of the aircrew members” of the Russian plane. However, it stated that the government of Bashar Assad “whose military shot down the Russian plane,” is “fully responsible” for the incident.As well as Damascus, Israel put the blame for the “unfortunate incident” on Iran and the Hezbollah group.

In a series of tweets the Israel Defense Forces (IDF) explained that its jets were targeting a Syrian facility “from which systems to manufacture accurate and lethal weapons were about to be transferred on behalf of Iran to Hezbollah in Lebanon.” It claimed that the weapons were “meant to attack Israel.”

The IDF assumed that the Syrian anti-air batteries “fired indiscriminately” and didn’t “bother to ensure that no Russian planes were in the air.” The Israelis said that when the Syrian military launched the missiles which hit the Russian plane, its own jets were already within Israeli airspace. "During the strike against the target in Latakia, the Russian plane that was then hit was not within the area of the operation."

Russian Defense Minister Sergei Shoigu has held a telephone call with his Israeli counterpart Avigdor Lieberman, stating that Israel is solely to blame for the downing of Russia’s Ilyushin Il-20 aircraft over the Mediterranean Sea, the Russian Defense Ministry said on Tuesday, TASS reported.

"The responsibility for the downing of the Russian aircraft and the death of its crew lies solely with Israel. The Russian Defense Ministry used various communication channels on numerous occasions to urge Israel to refrain from conducting airstrikes in Syria, which threaten the security of Russian military personnel," Shoigu said.

According to the Russian defense minister, the irresponsible actions by the Israeli Air Force led to a tragedy, which claimed the lives of 15 Russian military personnel, "despite all existing agreements on preventing dangerous incidents."

"The Russian military command [in Syria] had been notified [of the attack] one minute before the Israeli F-16 jets conducted airstrikes," Shoigu pointed out.

"The Israeli Defense Ministry’s actions are not in the spirit of Russian-Israeli partnership so we reserve the right to take retaliatory steps," the Russian defense chief stressed.

A Russian military plane Ilyushin-20 was shot down by the Syrian air defense over the Mediterranean Sea because Israel’s F-16 fighters used it as a cover, Russian Defense Ministry spokesman Igor Konashenkov told the media on Tuesday, TASS reports.

"By using the Russian plane as a cover the Israeli air pilots made it vulnerable to Syrian air defense fire. As a result, the Ilyushin-20, its reflective surface being far greater than that of F-16, was downed by a missile launched with the S-200 system," Konashenkov said.

Konashenkov said four F-16s of the Israeli Air Force carried out a strike with guided air bombs against Syrian facilities in the area of Latakia at about 22:00 on September 17. The fighters approached the target from the Mediterranean at a low altitude.

The Israeli planes deliberately created a dangerous situation for surface ships and aircraft in that area, he stated.

"The bombing raid was near the French frigate The Auvergne and in close proximity to the Ilyushin-20 plane of Russia’s Aerospace Force that was about to land," Konashenkov said.

He pointed out that Israeli command centers and F-16s’ pilots "could not but see the Russian plane, which was approaching the runway from an altitude of five kilometers."

"Nevertheless they deliberately staged this provocation," he said.

According to Konashenkov, Israel had issued no warning to the command of the Russian military group in Syria of the forthcoming operation.

"A hot-line warning was received less than one minute before the strike, which left no chance for taking the Russian plane to safety," he added.