‘My whole life is a victory towards myself’: Legendary Charles Aznavour celebrates 94th birthday 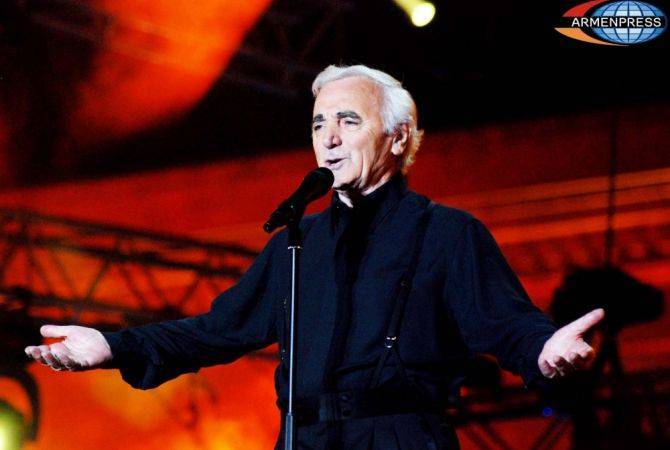 
YEREVAN, MAY 22, ARMENPRESS. “I don’t believe in inspiration, I believe in hard work. I work on every word like a master, correct every phrase. If I have to spend days, weeks or even months for finding a right phrase, I persistently do it”: Charles Aznavour.

The legendary French-Armenian signer on May 22 celebrates his 94th birthday.

…I “met” Aznavour for the first time at the age of 12-13: his “She” and “La Bohème” songs were frequently heard from our recorder. But in real life the first meeting with him took place later: in 2015, the day of the Armenia concert of System of a Down, in the airport. During that time it was impossible to talk with him, but in October, 2015 he again returned to Armenia and said in an exclusive interview to ARMENPRESS that he always feels happy when arrives in Armenia.

“My way was not easy and peaceful. I have faced so many hardships – from the doors, closed to my face, smiles full of irony, backbiting”, Aznavour said. “Probably my whole life is a victory towards myself. I have started from zero, I have learnt everything on my own: music, literature, acting skills. During those years study was not free, but my family’s capacities were modest, therefore I left the school bench early and starting from that moment I had to do everything on my own”, the world-renowned singer added.

Charles Aznavour (Vaghinak Aznavuryan), began singing and performing from an early age. Later in his life, he began to write songs for then-famous singers. In 1946, he met Edith Piaf, and together they toured with performances.

Initially he sang with Pierre Roche. He rose to prominence in 1959, after performing in Paris’ Olympia Concert Hall. Aznavour has performed extensively throughout the world, including in Yerevan.

He is the author of more than 1000 songs, with millions of his CD copies sold. Aznavour has performed along with Luciano Pavarotti, Placido Domingo, Liza Minelli, Patricia Kaas and Mireille Mathieu.

He performed Sayat Nova’s ‘Ashkharums’ with his daughter – Seda.

Charles Aznavour has starred in more than 60 films, including Ararat by Atom Egoyan, which was dedicated to the Armenian Genocide.

After the devastating 1988 Spitak earthquake in Armenia, he visited Armenia on numerous occasions.

Aznavour to Armenia, a relief foundation for the earthquake victims, was founded in Paris. Aznavour opened a representation of the foundation in Yerevan.

Together with Georges Garvartens, Aznavour wrote the ‘For you, Armenia’ song, and filmed a music video featuring 90 French singers and actos.

According to the tradition, on May 22 his birthday will be marked with a concert in Yerevan, at the Charles Aznavour square.

“I’m not afraid of death, I am just happy that I live, see, hear, feel and enjoy the surrounding world”, Charles Aznavour said.