We are set for boosting Armenian-Russian relations, Pashinyan tells Putin 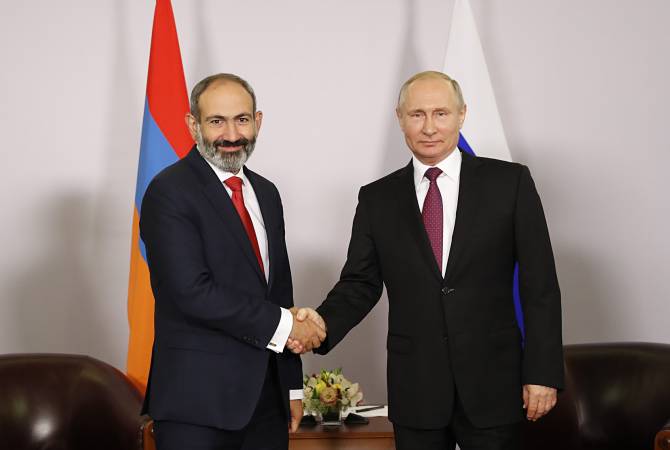 “Dear Prime Minister, dear colleagues, allow me to greet and once again congratulate you on being elected to the high office of the leader of Armenia’s government. At the outset of the meeting I would like to mention that Armenia is a close partner and ally in the region for Russia, this relates to both economic partnership and security issues. You know that Russia remains Armenia’s leading commercial partner, Russian investments in Armenia’s economic comprise almost 35% of foreign investments. Recently we observe a 25% growth of trade turnover, and supply volumes of Armenian agricultural products into the Russian market are growing with progressive paces, the growth comprised 38% in the previous months.

This is a very good dynamics, and I hope that we will succeed not only in maintaining it, but multiplying it. I would like to wish you success in the position of the government’s leader and I hope that our relations will continue developing in the same manner like previously. We will work with the same activeness in the international arena, in international organizations, beginning from the UN, where Armenia and Russia have always supported each other, up to our regional organizations, both in the security sector and economic developments,” Russian President Vladimir Putin said.

“Vladimir Vladimirovich, thank you for the warm words. It is nice to have the chance to meet you a few days after being elected as Prime Minister of Armenia, because I think there are discussable issues, but what related to the allied and strategic relations of Armenia and Russia isn’t subject to discussion.

I can principally assure that there is consensus in this matter in Armenia, and no one has ever questioned, and I think will not question the strategic importance of the Armenian-Russian relations. We are set and full of energy to convey new impetus to our relations in both political and trade-economic sectors. We hope to develop our relations in the military-technical and other sectors. Now, many tourists are arriving to Armenia from Russia, which is nice. I think Russian tourists like Armenia, and Armenians also like seeing so many tourists in Yerevan also. We highly appreciate the balanced stance which Russia had during our domestic political crisis and I think that it was a very constructive stance, which is highly appreciated not only by our government but also by the Armenian society. Allow me to once again congratulate you on the past holidays, it was interesting to follow the parade in the Red Square. We are very impressed with the achievements which the Russian military-industrial complex currently has. Thank you once again for this opportunity,” Armenian Prime Minister Nikol Pashinyan said.