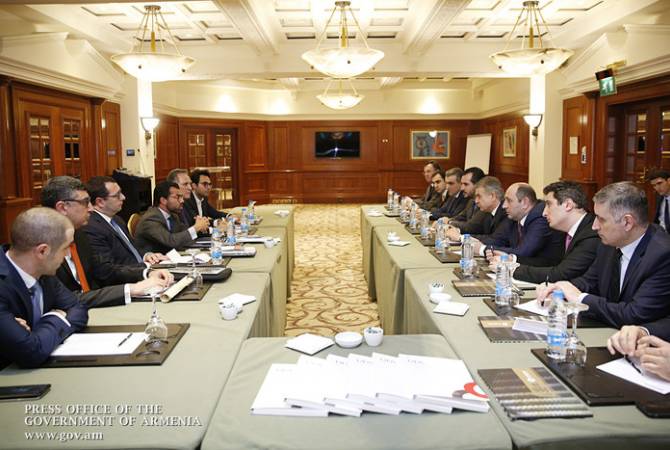 
YEREVAN, MARCH 13, ARMENPRESS. Armenian Prime Minister Karen Karapetyan on March 13 met with a group of businessmen in Beirut within the frames of his official visit to Lebanon, the government told Armenpress.

During the meeting the opportunities on implementing investment programs in Armenia were discussed.

The EuroMena Funds delegation members led by company’s co-founder Romen Mathieu presented the company’s activity directions, experience and said the company is interested in cooperation in the fields of insurance, IT, service and construction.

PM Karapetyan introduced Armenia’s current economic situation, stating that a 7.5% economic growth was recorded in the country in 2017, and there were also positive results in terms of other macro-economic indicators. In this sense, the PM said, it’s a good time to make investments in Armenia given the country’s opportunities to use different privileged trade regimes. The PM welcomed The EuroMena Funds’ desire to carry out activity in Armenia and on behalf of the Armenian government expressed readiness to thoroughly discuss the future steps.

The EuroMena Fund, L.P. specializes in high growth mid-market private companies. The fund typically invests in banking and insurance; maintenance and services; pharmaceutical, healthcare services, chemicals, and cosmetics; production of food and beverages; and retail and consumer products. It mainly invests in Middle East and North Africa (MENA) countries and the Mediterranean countries.

Future Group was established in 1981 and over the past decades has evolved from a regional concern to a truly global entity. Headquartered in Dubai with offices in London and New York and business hubs worldwide, Future Group today is a holding company that oversees 30 privately held companies across four core sectors spanning five continents.