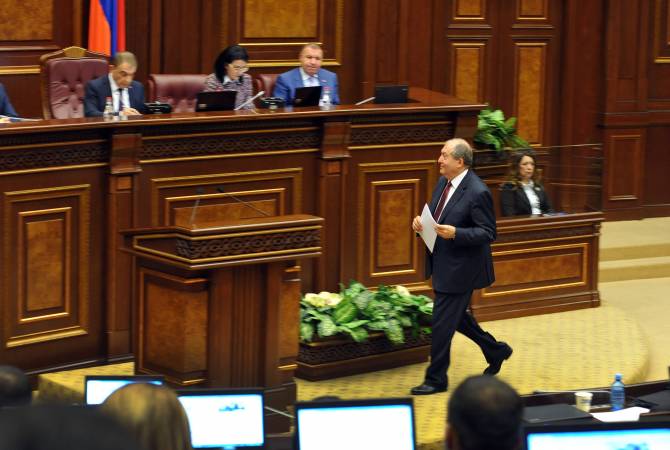 
YEREVAN, MARCH 1, ARMENPRESS. Presidential candidate Armen Sarkissian assures that he has given up dual citizenship in 2011 and holds Armenian citizenship only.

Speaking during the parliamentary debates on the election of the 4th president of Armenia in response to a question from opposition MP Artak Zeylanyan, Sarkissian said he renounced his UK citizenship on December 2, 2011 and from that day he holds Armenian citizenship only.

“On December 2, 2011, when I couldn’t even dream that the Constitution of Armenia can change and I would  be standing here answering your questions, I applied [for renunciation] and hold solely Armenian citizenship since then,” Sarkissian said.

He further added that he had applied for UK citizenship back in 2000 after resigning as Ambassador of Armenia to the UK.

“It was necessary for my activities because I wasn’t thinking about service after it. I was granted citizenship after two years since applying, but during those years I felt myself as citizen of Armenia, which was reflected in my activities”, he said.

According to Sarkissian, when a dual citizenship holder applies for renouncing citizenship in the UK, the application is granted immediately.

Earlier in January Armen Sarkissian, Armenia’s Ambassador to the United Kingdom, was offered by incumbent President Serzh Sargsyan, who also serves as President of the country’s ruling Republican Party, to be the party’s candidate for the upcoming presidential elections. Sarkissian initially requested a brief period of time for pondering the offer, and in the meanwhile held various meetings with political parties, civil society representatives, Diaspora structures and others, and subsequently agreed to be nominated.

Few days later the HHK and the ARF, the ruling coalition, officially nominated Sarkissian’s candidacy for the presidential election.

The election will take place March 2 in the parliament.