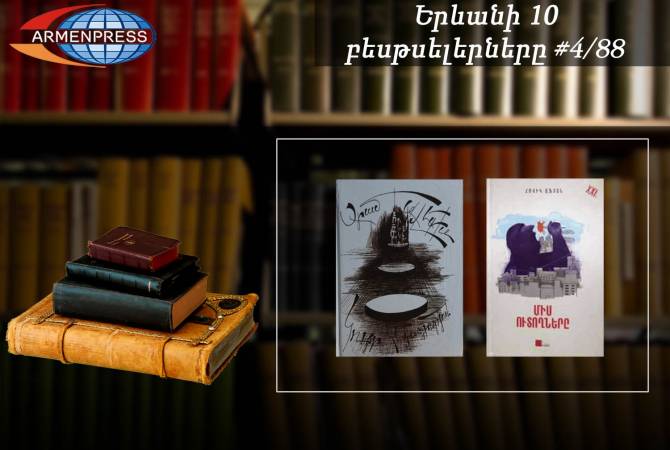 ‘Blind Punctuation’ by Aram Avetis is ranked 2nd in this week’s list. The editor of the book is Arkmenik Nikoghosyan.

Grig’s ‘Jesus Cat’ is 3rd. This is the first book of the young prose writer. The novels involved in this work bring forward a unique writing style on the one hand and an original vision on the world and people on the other. This combination forms characters in Grig’s creative space, which help to discover another invisible side of life. The book was published by “Antares”. Editor – Gurgen Khanjyan.

The 4th position is captured by Vardges Petrosyan’s ‘Lived and not lived years’ book. The book was published on the occasion of the 85th anniversary of Vardges Petrosyan. It has been edited by Ashot Gabrielyan.

Journalist Hovik Afyan’s book titled ‘Meat eaters’ is ranked 5th in the bestselling list of the week. It’s a collection of 22 stories. The book focuses on people. The editor of the book is Arkmenik Nikoghosyan.

‘Rope of a guilt’ by Hovhannes Yeranyan is 6th. This is the 7th book of the author. The book has been edited by Arkmenik Nikoghosyan.

This week Edgar Harutyunyan’s ‘Unfound Chamomiles’ is ranked 7th. The story is about complex human relationships – love, friendship and betrayal. The editor of the book is Davit Gyurjinyan.

Antoine de Saint-Exupéry’s ‘Terre des homes’, literally translated as Land of Men, published in English as Wind, Sand and Stars is 8th in this week’s list. It is a memoir dealing with themes such as friendship, death, heroism, and solidarity among colleagues, and illustrates the author's opinions of what makes life worth living.

Like the previous week, this week as well ‘The Red-Haired Woman’ by Turkish novelist and Nobel Prize laureate Orhan Pamuk is ranked 9th. The Red-Haired Woman is the story of a well-digger and his apprentice looking for water on barren land. It is also a novel of ideas in the tradition.

‘Brave New World’ novel written in 1931 by English author Aldous Huxley concludes this week’s list. The novel opens in the World State city of London in AF 632 (AD 2540 in the Gregorian calendar), where citizens are engineered through artificial wombs and childhood indoctrination programs into predetermined classes (or castes) based on intelligence and labour.