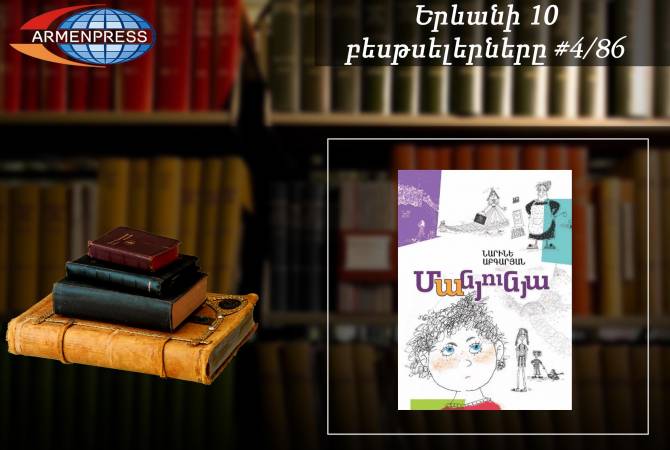 Narine Abgaryan’s ‘Manyunya’ book tops this week’s list. The book has been translated by Narine Gijlaryan. It tells a story of two friends from childhood, Narine and Manyunya, the grandmother of Manyunya, as well as numerous relatives. The book was awarded with the Russian national literary ‘Handwriting of the Year’ award. The editor of the book is Rob Manukyan.

‘The Red-Haired Woman’ by Turkish novelist and Nobel Prize laureate Orhan Pamuk is ranked 2nd this week. The Red-Haired Woman is the story of a well-digger and his apprentice looking for water on barren land. It is also a novel of ideas in the tradition.

This week Oscar Wilde’s ‘The Picture of Dorian Gray’ improved its positions and is ranked 3rd. Dorian Gray is the subject of a full-length portrait in oil by Basil Hallward, an artist who is impressed and infatuated by Dorian's beauty; he believes that Dorian's beauty is responsible for the new mode in his art as a painter. Through Basil, Dorian meets Lord Henry Wotton, and he soon is enthralled by the aristocrat's hedonistic worldview: that beauty and sensual fulfillment are the only things worth pursuing in life.

‘The Alchemist’ by Brazilian writer Paulo Coelho is 4th. Originally written in Portuguese, it became an international bestseller translated into some 70 languages as of 2016. An allegorical novel, The Alchemist follows a young Andalusian shepherd in his journey to Egypt, after having a recurring dream of finding treasure there.

Paulo Coelho’s another book ‘Devil and Miss Prym’ is a new book in the list. In the novel the author presents the constant fight of light and dark. The book has been translated by Anna Marutyan from Portuguese and has been edited by Shogher Khachatryan. The book is ranked 5th.

‘The Prophet’ is ranked 6th in this week’s bestselling list. It’s a book of 26 prose poetry fables written in English by the Lebanese-American artist, philosopher and writer Kahlil Gibran. It was originally published in 1923 by Alfred A. Knopf. It is Gibran's best known work. The Prophet has been translated into over 40 different languages and has never been out of print.

Mark Aren’s ‘Where Wild Roses Bloom’ comes next. The story describes the inner world of an Armenophobic Turkish former serviceman, when he, already an old man, suddenly hears a lullaby song that reminds him of his mother and later finds out that the song is in Armenian: realizing his parents were Armenians. He spends his remaining life searching the graves of his parents, without knowing that it was a misunderstanding.

‘The Book of Lamentations: Odes’ by St. Gregory of Narek is ranked 8th.

Daniel Glattauer’s ‘Forever Yours’ is ranked 9th. Judith, in her mid-thirties and single, meets Hannes when he steps on her foot in a crowded supermarket. Hannes is an architect - single and in the prime of life. Not only is he every mother-in-law's dream, but Judith's friends are also bowled over by him. At first Judith revels in being put on a pedestal by this determined man who seems to have eyes only for her. But as time goes by, she finds his constant displays of affection increasingly wearying and his intensive attention becomes oppressive and overwhelming. The book is ranked 9th.

‘Lolita’ by Russian American novelist Vladimir Nabokov concludes this week’s list. The novel is notable for its controversial subject: the protagonist and unreliable narrator—a middle-aged literature professor called Humbert Humbert—is obsessed with the 12-year-old Dolores Haze, with whom he becomes sexually involved after he becomes her stepfather. "Lolita" is his private nickname for Dolores. Lolita quickly attained a classic status. Today it is regarded as one of the prime achievements in 20th century literature.