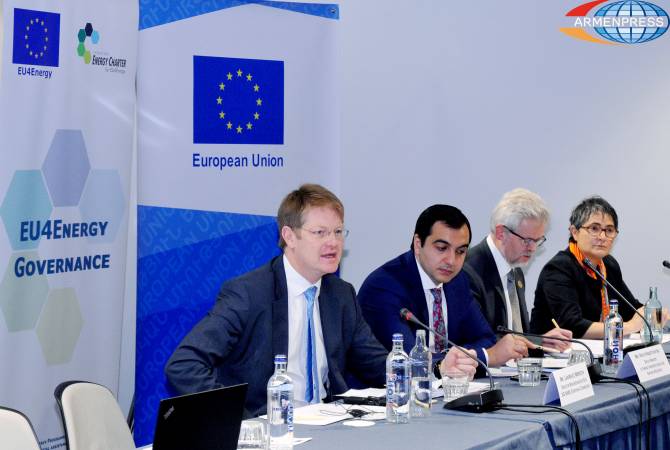 Conference titled ‘Unlocking energy efficiency potential in Armenia’ was organized in Yerevan by the EU4Energy program.

“Energy saving is of great importance in your country’s agenda, it is also a priority in the context of cooperation with the Eastern Partnership countries”, Lawrence Meredith, Director "Neighbourhood East" in the Directorate-General for Neighbourhood and Enlargement Negotiations (DG NEAR), said.

The EU official stated that in order to reach considerable success in energy saving and energy efficiency cooperation is very important. In this context he presented the EU’s investments in this sector in Armenia. “We have already invested 30 million Euros in 10 different projects on financing energy efficiency and energy saving”, he said, adding that 6.000 households of 17 towns are beneficiaries of the project. He also highlighted the project of street lighting in Yerevan with LED lamps.

As for the EU experience and main challenges in energy saving, the official said: “In this field the number one issue is to more effectively manage the demand since the cheapest energy is the one which is not consumed. We in the EU saw what changes occur when we cut the energy demand. The next issue is the introduction of new technologies in the field of clean energy. This is among the rare areas where you can make investments, save energy and create potential for growth. Today millions of jobs are opened in green energy field, and as a result of this the energy consumption in the EU has reduced by 10%”, Lawrence Meredith said, expressing confidence that Armenia also can achieve this result.

The EU official expressed hope that thanks to the conference they will be able to outline the ways to ensure further developments in energy saving field with their partners of the Armenian government, representatives of donor and financial organizations.