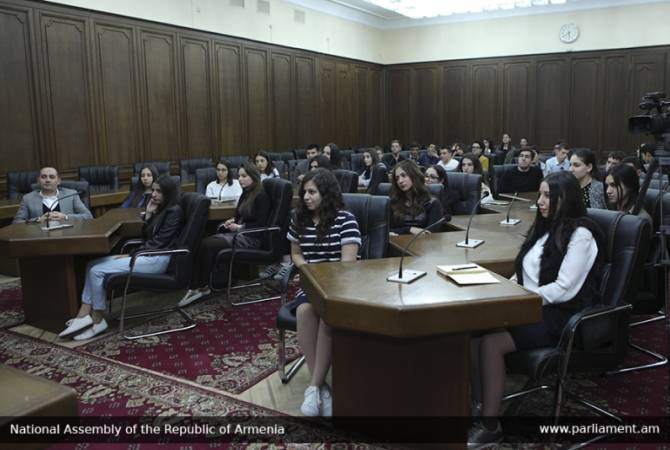 
YEREVAN, OCTOBER 27, ARMENPRESS. Within the framework of the Open Doors programme of the National Assembly of Armenia, the students of the American University of Armenia visited the parliament. First, the guests attended the parliament sitting, after which in the frames of the traditional open lesson the Vice President of the National Assembly Eduard Sharmazanov met with them.

By Sharmazanov’s proposal the open lesson went on in Q & A format. During the sincere talk with the students Eduard Sharmazanov expressed his viewpoints on different political issues, public-political different phenomena.

Talking about the draft law on Prevention of Domestic Violence and Protection of the Persons Subjected to Domestic Violence, Eduard Sharmazanov noted that he is univocally against violence, but the preliminary draft law is a matter of debate. The parliament Vice President underlined that he consulted with the lawyers and presented recommendations to the Government. He expressed hope that they would be accepted by the executive body.

The students were also interested in the issue of the borderline regions' libraries.

The Vice President of the parliament advised the students to be initiating and present their versions of solving the problems.

“You are the happiest generation of our country, because you were and you live in independent Armenia,” the Vice President  of the parliament said.

At the end of the meeting, according to tradition, the students photographed with Eduard Sharmazanov.