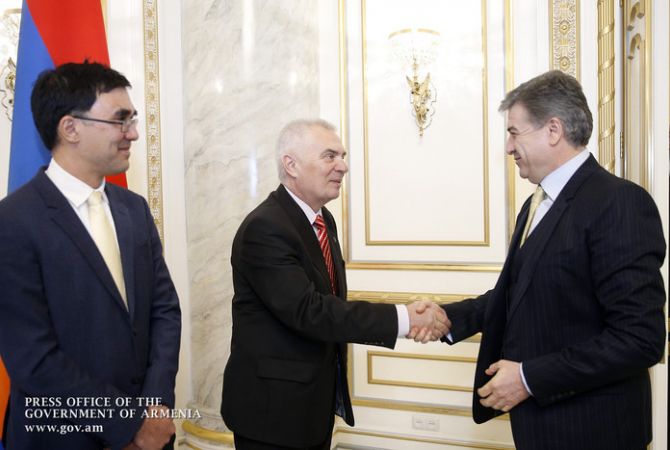 
YEREVAN, FEBRUARY 7, ARMENPRESS. Prime Minister Karen Karapetyan on February 7 had a meeting with Head of the EU Delegation to Armenia, Ambassador Piotr Switalski, press service of the Government told “Armenpress”.

Issues related to the cooperation in the anti-corruption field were discussed.

PM Karapetyan presented the Government’s steps taken till now, in particular, the legislative reforms and the adopted decisions, the works carried out within the frames of the Anti-Corruption Council. As for the upcoming plans, the PM said a new legislative package has been developed within the framework of which it is planned to create Anti-Corruption Independent Preventive Body based on the Ethics Commission of the high-ranking officials. Works are also carried out aimed at improving the quality of the investigation of corruption crimes. Currently a number of important legislative bills are being developed based on the discussions of the Anti-Corruption Council aimed at reducing the corruption risks in all sectors.

Karen Karapetyan stated that the effectiveness and success of the anti-corruption measures depend on the public’s civil stance, and the Government will work on activating the feedback from the public. PM Karapetyan said the Government is open for proposals and attached importance to the cooperation with the EU partners.

In his turn, Ambassador Piotr Switalski welcomed the Government’s efforts on fighting against corruption and conveyed the PM the gratitude of the business community for the decisions and legislative initiatives related to the sector. He said the EU Delegation to Armenia is ready to continue the cooperation with the Government within the frames of priorities and anti-corruption reforms outlined by the PM.

The sides also exchanged views on the possibilities to carry out joint projects on the sidelines of the Center for Strategic Initiatives.