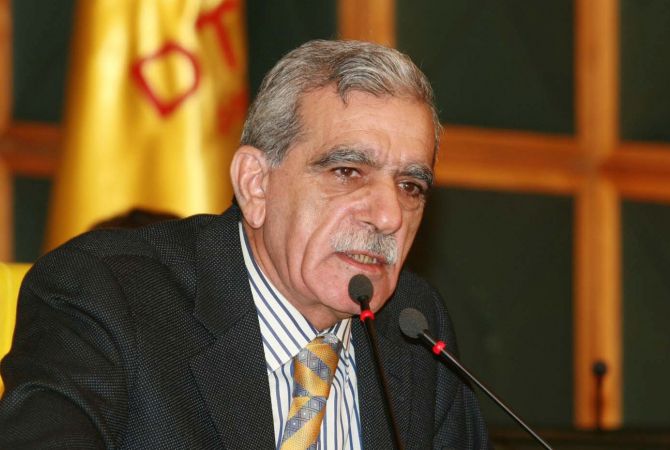 
YEREVAN, NOVEMBER 21, ARMENPRESS. Kurdish politician Ahmet Türk who has been recently dismissed from the post of Mardin Mayor, has been detained as part of the ongoing terror probe in Turkey, “Armenpress” reports citing Anadolu.

Ahmet Türk apologized for the Armenian Genocide for many times.

On November 17 the Turkish Interior Ministry dismissed Ahmet Türk from the Mayor’s post.

The investigation was launched against him on the charges of “violating the state union and unity, giving money to and being a member of armed terrorist group, abuse of power, humiliating the Turkish people, the Republic of Turkey, the Turkish Parliament”.

Ahmet Türk delivered a number of speeches on the Armenian Genocide. He acknowledged the Kurds’ role in the Armenian Genocide and apologized to the Armenians on behalf of the Kurdish people. He explained that the Kurdish population was used to commit the crimes against Armenians in 1915. “Our grandfathers and fathers were used in the injustices perpetrated against Armenians, Assyrians and Yezidis. There’s blood on their hands. With the blood of these peoples they bloodied their own hands. Thus, as their children and grandchildren, we apologize.”