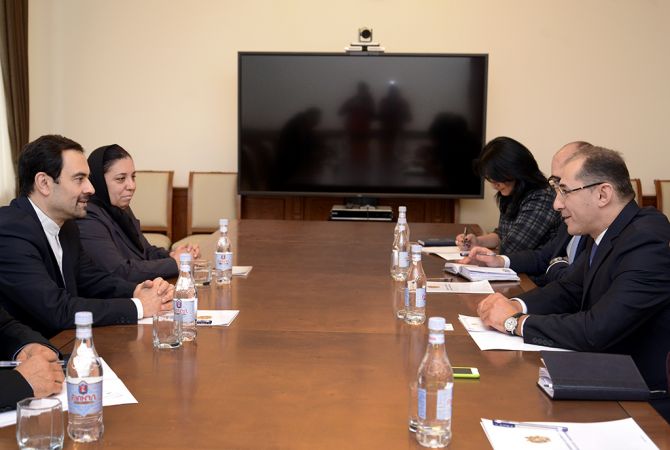 
YEREVAN, OCTOBER 24, ARMENPRESS. Minister of Finance of Armenia Vardan Aramyan received on October 24 Ambassador Extraordinary and Plenipotentiary of the Islamic Republic of Iran to the Republic of Armenia Seyed Kazem Sadjadi. As “Armenpress” was informed from the press service of the Ministry, the parties discussed financial and trade issues. Particularly, Minister Arasmyan noted that bilateral investments are on a very low level. “Iranian investments in Armenia amount to 3 million USD, while Armenian investments in Iran amount to 250 thousand USD. This means that we have much to do here and drastically increase the numbers considering the centuries-old trade potentials between the two countries”, he said.

The Armenian minister noted that trade turnover can be increased by the elaboration and implementation of mega projects, which was impossible in the past due to the economic sanctions against Iran. “The economic sanctions on our neighbor impact us as well and we have always raised alarm over this to our European partners. Now we have a new reality. We are happy to see Iran regulating its economic relations with other countries and I am convicted we can achive much more together”, Minister of Finance of Armenia said.

Ambassador Seyed Kazem Sadjadi congratulated Vardan Aramyan on assuming the post of the minister and mentioned that he had a meeting with the previous minister a year ago, and since structural changes have taken place during this period, he inquired about the new functions of the ministry and changes in the banking and custom spheres. The Ambassador was particularly interested in expanding cooperation in the sphere of insurance, prospects for opening a new branch of “Mellat” bank, as well as bilateral cooperation in international financial platforms.

The interlocutors shared the opinion that the current economic indicators are not satisfactory and it is necessary to work harder to fill the gap. In the context of the mega projects Minister Aramyan noted the only one, the energy project, is underway, while there are prospects for cooperation in other spheres as well, such as the construction of “North-South” highway or the construction of slaughterhouses which can be implemented based on public-private investments.