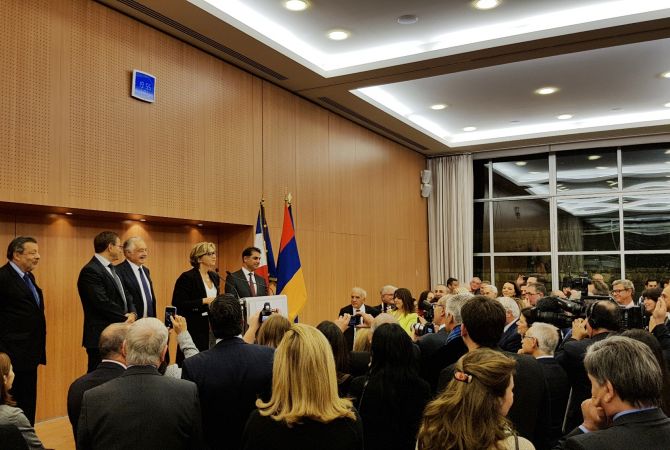 
YEREVAN, OCTOBER 7, ARMENPRESS. A reception dedicated to the 25th anniversary of Armenia’s independence took place at the event hall of Île-de-France’s regional council in Paris organized by Île-de-France’s regional council and Co-ordination Council of Armenian organisations of France. The event was attended by Ambassador of Armenia to France Vigen Chitechyan. A number of French parliamentarians, mayors, heads of diplomatic missions, heads of French-Armenian organizations and hundreds of other guests were present at the event, “Armenpress” was informed from the press service of MFA Armenia.

President of the Ile de France region Valerie Pécresse, congratulating on the 25th anniversary of Armenia’s independence, mentioned that Armenia restored its independence thank to its spiritual courage and pride. Mrs. Pécresse shared with her warm memories of her visit to Armenia and highlighted the necessity to further foster the cooperation between Yerevan and Ile de France.

Afterwards, Co-chairmen of the Coordination Council of Armenian Organizations in France Ara Toranian and Mourad Papazian took the floor. The series of messages was concluded by the speech of the Vice President of Ile de France region Patrick Karam, expressing resolute and unconditional support to Armenia, Artsakh and Armenians.

Highlighting France’s major contribution to the international recognition of the Armenian Genocide and the peaceful solution of Nagorno Karabakh issue, Ambassador Vigen Chitechyan expressed gratitude to French-Armenians for the support rendered to Armenia since the first days of independence.