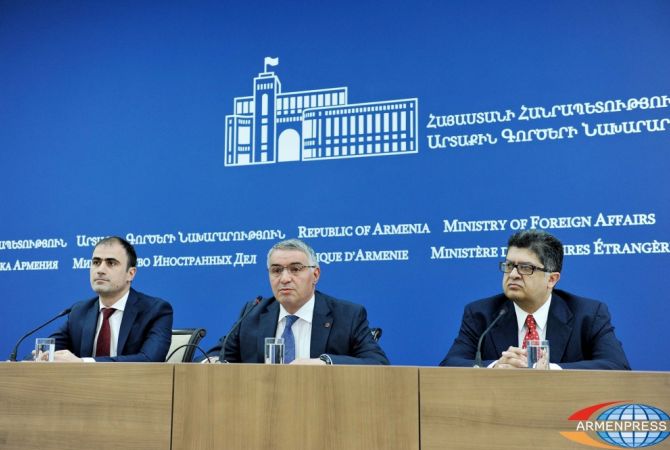 
YEREVAN, JULY 20, ARMENPRESS. The inclusion of Ani – the medieval Armenian Bagratuni capital of Armenia – into the UNESCO World Heritage Sites is a great achievement in terms of its conservation, officials said during a press conference in the Ministry of Foreign Affairs.

According to Deputy Minister of Culture Nerses Ter-Vardanyan, the reviewed UNESCO bid, entitled “Ani – Archaeological Site” reflected Ani’s identity and clearly presented its Armenianness, which was very important for the Armenian delegation.

“We attach importance to the inclusion, above all by the fact that our historic-cultural legacy is spread throughout the world, and we have to be the owners of monuments outside the Armenian borders and welcome facts, when international organizations take them under their supervision. The inclusion of the monument to the UNESCO sites creates some guarantees for the conservation of the monument, and in the context of monuments located in Turkey it attaches even more importance”, the Deputy Minister said.

According to him, all further actions in connection to Ani – conservation, management of tourists – will be regularly reported by Turkey to UNESCO.

Vahram Kazhoyan, Secretary General of UNESCO National Committee in Armenia said the submission of the bid by Turkey was no coincidence. The Armenian side in UNESCO had numerously voiced in various speeches the issue that many monuments of Armenian cultural legacy are located in territories of other states, which do not receive proper attention.

According to UNESCO regulations any country can present monuments which are located on its administrative territory, therefore Armenia couldn’t have submitted a bid regarding its monuments outside its borders.

He noted that the initial bid presented by Turkey was called “Cultural landscape of Ani”, which was refused, because it that case the landscape was not presented, rather he historic-cultural, archaeological monument – the city walls, ruins, churches, monasteries.

“The expert committee made numerous other observations, which were changed during the process. The final bid submitted by Turkey was pretty good, of course it wasn’t perfect, but it wasn’t negative as well”, he said.

“An unprecedented discussion began around the bid, only two countries of the 21 country member committee didn’t speak – Cuba and Azerbaijan. All others, speaking about “Ani – Archaeological Site” bid, stressed its Armenianness.

After the inclusion of the site, the Armenian delegation received congratulations.