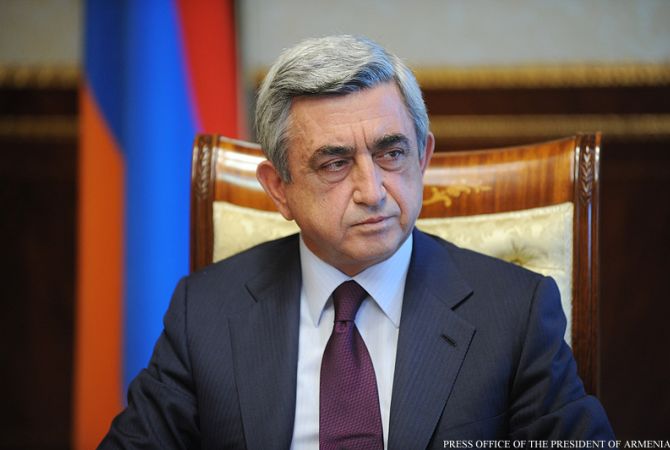 
YEREVAN, MAY 16, ARMENPRESS. The Armenian President Serzh Sargsyan will meet the EU High Representative for Foreign Affairs and Security Policy Federica Mogherini on May 16 in Vienna. As “Armenpress” reports, Mogherini posted a note in her Twitter microblog. “Today evening I will hold meetings with the Presidents of Armenia and Azerbaijan”, Mogherini stated.

According to the “Armenia” TV channel, the meeting of the Armenian President and US Secretary of State John Kerry is scheduled in Vienna.

President Serzh Sargsyan has arrived in Vienna. On May 16, the President will take part in a number of working meetings initiated by the OSCE Minsk Group Co-Chairs.

Foreign Ministers of the Co-Chairing countries (Russia, France and USA) are also in Vienna.

The Minsk Group Co-Chairs had issued an announcement earlier on May 12.

The announcement read: “In the light of the recent violence and the necessity of de-escalating the tension in the contact line, we believe the time has come for Presidents of Armenia and Azerbaijan to meet. Their main goal will be strengthening the ceasefire regime and achieving agreement on trust measures, which will create favorable conditions for the resumption of talks for achieving a comprehensive settlement, based on the discussed principles and basic elements”.