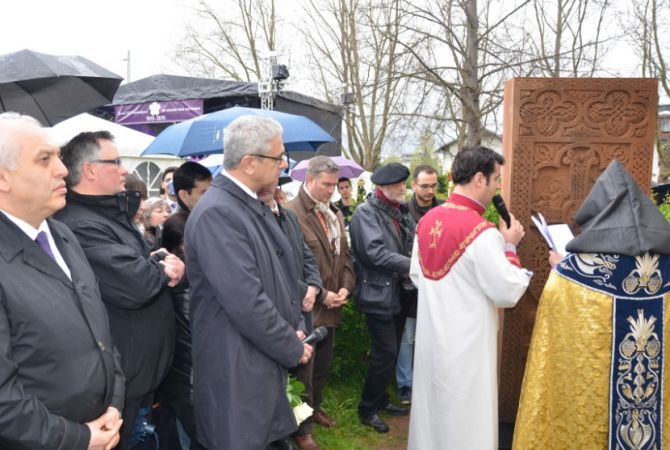 
YEREVAN, APRIL 18, ARMENPRESS. On April 17 the opening ceremony of the cross commemorating the victims of the Armenian Genocide and the order of blessing took place by the leader of German Diocese of the Armenian Apostolic Church, His Eminence Archbishop Garegin Bekchyan in one of the central squares of the city of Jena, in the Free State of Thuringia, Germany.

As “Armenpress” was informed by the Department of Press, Information and Public Relations of the Foreign Ministry of Armenia, the ceremony began with welcoming remarks delivered by the Armenian Ambassador to Germany Ashot Smbatyan, Budnestag MP, the President of the German-Armenian Forum Albert Weiler and the Major of Jena Albrecht Schröter. They stated in their speeches that the recognition of the Armenian Genocide by Turkey is the reconciliation cornerstone.

MPs of German Bundestag and Landtag, the employees of the Jena Municipality and the representatives of the Armenian community participated in the ceremony.