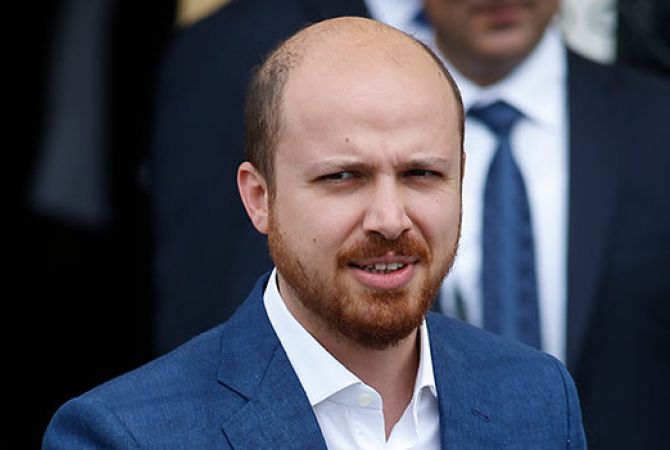 
YEREVAN, OCTOBER 6, ARMENPRESS. In the latest series of tweets by government whistleblower Fuat Avni, President Recep Tayyip Erdoğan’s son Bilal has allegedly been snuck into Italy with armed guards, in the event the Erdoğan clan must flee Turkey over possible treason charges. “Armenpress” reports the aforementioned referring to BGN NEWS.

“Noticing that he’s nearing the end of the road, [President Erdoğan] has ordered Bilal to ‘quietly’ leave the country in the company of armed guards. The destination for Bilal and the considerable amount of money with him is Italy,” government whistleblower and Twitter phenomenon Fuat Avni revealed in a series of tweets on Monday.

Fuat Avni has been a thorn in the side of President Recep Tayyip Erdoğan and the Justice and Development Party’s (AK Party) for nearly two years now, having correctly revealed many of their top secret plans.

President Erdoğan has allegedly been worried by an internal investigation file, which establishes that he could be tried for treason – the only crime for which a Turkish president can undergo prosecution. The investigation file implicates Erdoğan for his involvement with the Kurdish settlement process, and has prompted the president to send his son out of the country.

Avni claimed that Bilal Erdoğan flew to Italy on Sept. 27, and that the plan includes the possibility of his extended stay, allowing him to take in other family members if required.

While there, he is also expected to tend to the family’s bank accounts in Switzerland and other countries, managing billions of dollars in family finances. He will be staying in the vicinity of Lake Como, near the Swiss border, giving him easy access to Swiss banks.

The family will decide whether or not Bilal will return depending on the situation that emerges from the Nov. 1 snap election.

“[President Erdoğan’s] fears have reached unprecedented heights. In his mind, he’s planning to first sneak out all his money, then his family and finally himself,” Avni tweeted.

Avni claimed that Erdoğan had given the task of arranging his son’s move to his “dirtiest” lieutenant, acting Foreign Minister Feridun Sinirlioğlu, who in turn had mobilized his “most trusted man,” Ambassador to Rome Aydın Sezgin. Avni added that Sinirlioğlu was particularly pleased with the arrangement, since he expected to receive a big commission without having to commit to anything just yet.

Bilal’s armed guards were unable bring their weapons with them due to Italy’s gun laws, but Sinirlioğlu was reportedly able to solve the problem through trickery: the Turkish officials claimed that the guards had been appointed as security by the Milan Consulate, thus granting them permission to carry arms.

Sinirlioğlu and Sezgin have also connected Bilal Erdoğan with some French nationals, says Avni, who will help smuggle him out of Italy if the need arises.

In a second series of tweets posted Monday afternoon, Fuat Avni claimed that President Erdoğan has tasked his close personal aid, former Interior Minister Erkan Ala, with finding a way to shift the blame for the Kurdish settlement process – a potentially treasonous issue – onto public servants and the military. Avni also claimed that many public servants from the Prime Ministry, Justice Ministry, Interior Ministry and Foreign Ministry, upon learning that the president’s son had been snuck out of the country, got in touch with the presidential palace and also demanded out. “Erdoğan’s lieutenants are currently busy trying to convince them to stay,” Avni said, adding that the president needs the public servants to cover up the mess he has gotten himself into.