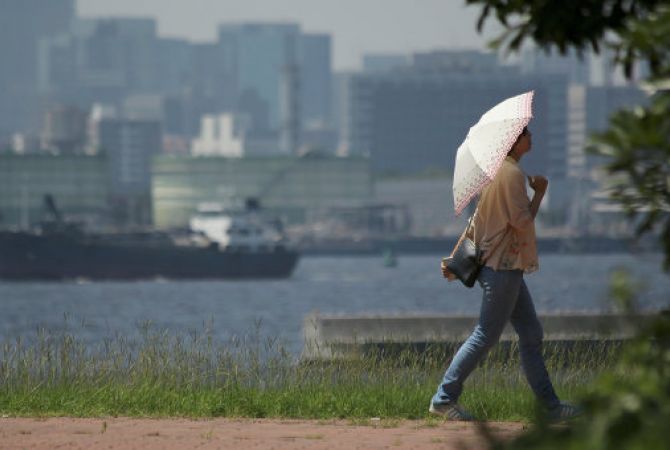 
YEREVAN, JULY 14, ARMENPRESS. Four elderly people died Monday, apparently of heatstroke, as Japan experienced the hottest day so far this summer, with the temperature topping 35 degrees in more than 120 of the 928 observation points across the country. As Armenpress reports citing “Japan Times,” two women, aged 82 and 84, were taken to hospitals from bedrooms that lacked air conditioning and were confirmed dead, while a 79-year-old woman who was weeding on a street and an 84-year-old man who had been working on a farm were found collapsed and later confirmed dead.

It was the fifth day in a row that temperatures of 35 degrees or higher were registered, with the number of such locations far surpassing the previous high this summer of 18. Temperatures of 30 or higher were recorded at more than 500 locations. The mercury hit 38.1 in Yokote, Akita Prefecture, a local record for July, and 37.9 in Uozu, Toyama Prefecture, the highest ever there, the Meteorological Agency said.

A hot weather warning was issued for most prefectures in the Tohoku, Chugoku and Shikoku regions, and the Yaeyama region in Okinawa Prefecture. The agency urged people to take caution against heatstroke. Meanwhile, the officer of the medical examiner in the Tokyo Metropolitan Government reported what appeared to be the first heatstroke death in the central 23 wards this year.

Tokyo police and fire department officials said that a 48-year-old man died, apparently from heatstroke, after he was found lying on a street Friday morning in Shinjuku. The temperature was 8 degrees higher than the day before. According to the fire department, 153 people in Tokyo were rushed to hospitals by ambulance due to possible heatstroke during the three days to Sunday, with two of them in serious condition. On Monday, the number of people who were transported to hospitals stood at 36 as of 3 p.m., with two of them seriously ill, fire department officials said.

Temperatures of 35 or higher were recorded at some 120 observation points across Japan, more than 10 percent of the total monitoring points. Electricity consumption in the service area of Tokyo Electric Power Co. surged, apparently due to strong power demand for air conditioners at households and companies.

Electricity demand reached 93 percent of Tepco’s overall supply capacity between 4 p.m. and 5 p.m., the highest level so far this summer, the company said. As Monday’s electricity demand topped Tepco’s estimate, the company increased hydropower generation to ensure a stable supply. Maximum demand on the day came to 43.57 million kilowatts, up by some 10 million kilowatts from a week before.