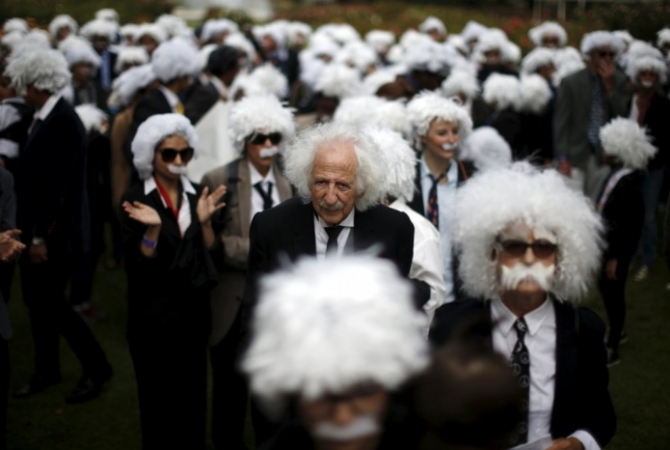 
YEREVAN, JUNE 29, ARMENPRESS: Here's a mass of energy Albert Einstein would have been proud of – a huge gathering of his lookalikes. Armenpress reports, citing the Mirror that fans dressed as the German-born theoretical physicist in a bid to beat the world record of 319.

One, Benny Wasserman, 81, was at the get-together in Los Angeles to raise cash for School on Wheels homeless children’s education group in America.

The current record of 319 Einstein lookalikes was set by students at Black Pine Circle School, Berkeley in America in March.

March 6 was the 100th anniversary of Einstein's theory of relativity.

The physicist received the Nobel Prize for Physics in 1921.

Einstein was visiting America when Adolf Hitler came to power in 1933.

Being Jewish, he did not return to Germany and became a US citizen in 1940.

As well as his theory of relativity, Einstein also led research into the atom bomb, but later highlighted the danger of nuclear weapons.

Einstein was the son of an engineer and worked as a lecturer.

His name has now become synonymous with genius.