Monument to children of Leningrad Blockade unveiled in Yerevan 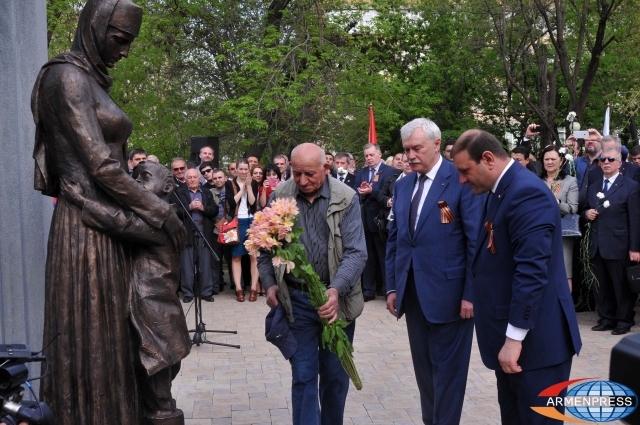 
YEREVAN, 30 APRIL, ARMENPRESS. A monument to the children of the Leningrad Blockade was unveiled during a solemn ceremony held at Vahagn Davtyan Park in Yerevan. Among those attending the ceremony were Governor of Saint Petersburg Georgi Poltavchenko, Mayor of Yerevan Taron Margaryan and the creators of the monument, including Chief Architect of Yerevan Tigran Barseghyan, architect of Saint Petersburg Vladislav Manachinsky, veterans of the 1941-45 Great Patriotic War and others.

“This monument is a special gift to Armenia since your country extended a helping hand to the children of the Leningrad Blockade during the difficult times of the Great Patriotic War. Many children of the orphanages of Leningrad found their second home in Armenia,” Governor of Saint Petersburg Georgi Poltavchenko mentioned and added that more than 200 children had been moved from Leningrad to Armenia during the years of the Great Patriotic War, as “Armenpress” reports.