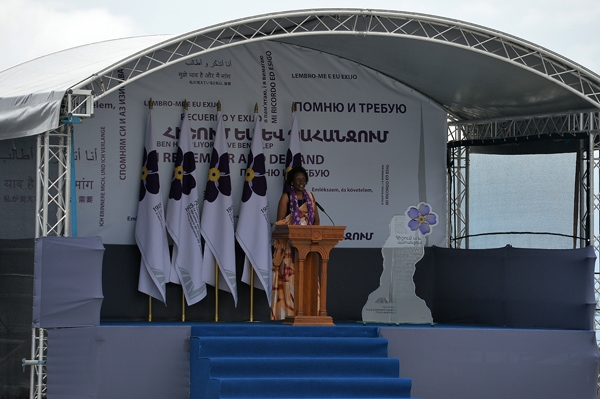 
YEREVAN, 24 APRIL, ARMENPRESS. Rwandan genocide survivor Esther Mujawayo read the declaration of the Global Forum “Against the Crime of Genocide” in front of world leaders at the peak of Tsitsernakaberd Armenian Genocide Memorial on April 24. As “Armenpress” reports, the 57-year-old Rwandan genocide survivor expressed gratitude to the Armenian government and people for furthering prevention agenda and raising public awareness to combat the crime of genocide. “I am Esther Mujawayo, survivor of the Genocide against Tutsis in Rwanda in 1994. I have an honour to partake in this historic Centennial commemoration of the Armenian Genocide which has attracted the attention of the entire international community. It is very important that we stand by our Armenian sisters and brothers sharing their pain, their struggle, and of course their rebirth,” said Esther Mujawayo.

“We hope that Armenia would successfully continue this initiative aimed at our collective duty to protect our children, our societies from the scourge of the crime of crimes- the

genocide,” Mujawayo added and read the declaration of the Global Forum held in Yerevan.

The following is the entire text of the declaration of the Global Forum “Against the Crime of Genocide”:

The Global Forum Paying tribute to the memory of the innocent victims of the Armenian Genocide, the genocide of Greeks and Assyrians, Holocaust, the genocides in Rwanda, Cambodia, Darfur and other crimes against humanity,

Recalling the United Nations Charter, the Universal Declaration of Human Rights, the UN Convention for the Prevention and Punishment of the Crime of Genocide,

Being concerned about the recurring cases of genocides and crimes against humanity, despite the existing appropriate international prevention mechanisms,

Being also concerned about recent alarming outspread of violence, extremism and terrorism in different regions of the world directly threatening the ethnic and religious minorities,

Having discussed the issues of impunity, individual and state accountability for the crime of genocide, the appropriate means of addressing the consequences of this crime,

Noting the importance of the global struggle against genocides and crimes against humanity, Emphasizing the role that various governments, parliaments, international organizations and civil society have in the prevention of genocide and their contribution to fostering prevention mechanisms,

- Acknowledges that genocide is the ultimate crime with irreversible consequences, and calls upon all states to bring their utmost contribution to the strengthening of genocide prevention mechanisms,

- Reaffirms that the primary genocide prevention mechanisms remain the ones existing in the framework of the United Nations and welcomes the adoption of UN Human Rights Council resolution on March 27, 2015 entitled “Prevention of Genocide”,
- Stresses that genocide prevention depends on the efficiency of human rights protection, the strength of the culture of tolerance and non-discrimination,
- Recognizes that denial, in particular on a state level, is unacceptable and underlines that timely condemnation of genocides and efficiently addressing their consequences may serve as important tools for prevention and reconciliation,
- Calls upon the international community on the eve of the Centennial commemorations of the Armenian Genocide to support the continuous efforts aimed at its worldwide recognition.”