Not recognizing Armenian Genocide led to Holocaust: Leaders of Jewish community of Armenia 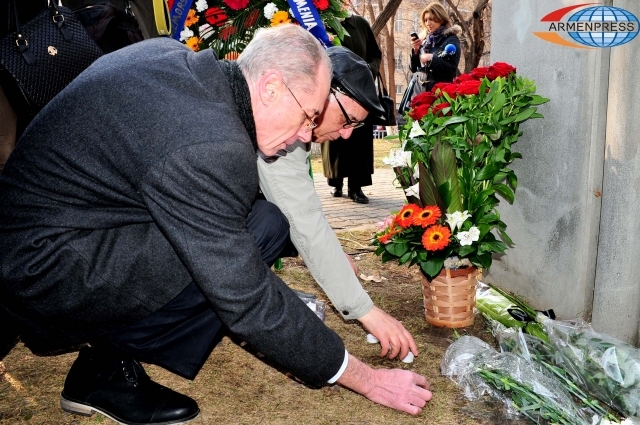 
YEREVAN, JANUARY 27, ARMENPRESS. On January 27, Auschwitz concentration and death camp of the Nazi Germany was liberated 70 years ago. The International Holocaust Remembrance Day is marked on January 27. On this occasion the UN Office in Armenia together with the Ministry of Foreign Affairs of the Republic of Armenia and the Jewish community of Armenia organized a solemn ceremony paying tribute to the memory of victims.

As reports “Armenpress”, the UN Resident Coordinator in Armenia Bradley Busetto and the Deputy Minister of Foreign Affairs of the Republic of Armenia Sergey Manasaryan laid a wreath dedicated to the memory of the victims of Holocaust.

The UN Resident Coordinator in Armenia Bradley Busetto underscored: “Paying tribute to the victims’ memory, this international day gives us an opportunity to reaffirm the commitment of the international community to take steps against anti-Semitism, racial discrimination, and intolerance, and not to let their repetition in future.”

“We have recently encountered the revival of Nazism, anti-Semitism, spreading terrorism and violence, the painful example of which is the Armenian Genocide in the beginning of the last century, which has not been condemned and recognized by a row of countries and which led to Holocaust and new genocides in future.

Taking into consideration the historical legacy of the two peoples with similar fates, we must make all efforts to prevent the repetition of these horrific facts of history in future.

The unacceptable silence of the international community and indifference towards the crime against humanity and civilization, as well as the targeted denial of any act of genocide paves the way for new violence on religious and national grounds.

The international community must show solidarity in the direction of recognition, condemnation, and prevention of all known genocides.” Event in memory of Holocaust victims. Photos by Gevorg Perkuperkyan