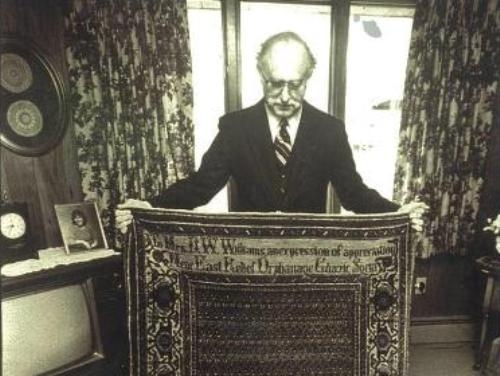 
YEREVNA, DECEMBER 4, ARMENPRESS. The Armenian Assembly of America (Assembly) will display the "Armenian Orphan Sister Rug" at the Assembly's annual holiday reception and briefing in Boston, Massachusetts later this week. Dr. H. Martin Deranian, author of "President Calvin Coolidge and the Armenian Orphan Rug" will be the special guest, where he will talk about the Ghazir rug, also known as the Armenian Orphan Rug, the Sister Rug and the unique history surrounding their fate. In addition, the Assembly is delighted to feature remarks by Shant Mardirossian, Chairman of the Board of Directors of the Near East Foundation.

As reports “Armenpress”, a part of Dr. Martin Deranian's private collection, the Armenian Orphan Sister Rug was woven by the same orphans at the Ghazir orphanage. According to Dr. Deranian, the carpet dates from the 1920's and is 3' 5" x 5' 8". At one end, the carpet is woven with beautiful lettering that reads "To Mrs. D.W. Williams, an expression of appreciation Near East Orphanage Ghazir, Syria."

"The Ghazir Rug was presented to President Coolidge and to the American people as an expression of love and goodwill for America's compassionate and selfless role in preserving the lives of tens of thousands or orphans of the Armenian Genocide through the support of Near East Relief," Dr. Deranian told the Assembly. "The rug is also a memorial to the orphan-weavers who wove into its warp and weft a permanent remembrance of Armenia's darkest years, 1915-1923. It is my hope that the rug will be placed on public view," stated Deranian.

As the Assembly previously reported, the Smithsonian Institution in Washington, D.C. was planning a December exhibition of this historic treasure symbolizing the proud chapter in America's history. The White House issued a statement saying that, "The Ghazir rug is a reminder of the close relationship between the peoples of Armenia and the United States. We regret that it is not possible to loan it out at this time."

In 1925, Dr. John H. Finley, editor-in-chief of the New York Times and vice-chairman of the congressionally chartered Near East Relief organization (today called the Near East Foundation) presented a rug made by orphans of the Armenian Genocide to then President Calvin Coolidge. The rug was made in appreciation of America's generosity in aiding the survivors of the first genocide of the 20th Century.

21:29, 09.24.2021
Viewed 1898 times Today, no Armenian lives or practically could live in the territories under the control of Azerbaijan – Pashinyan