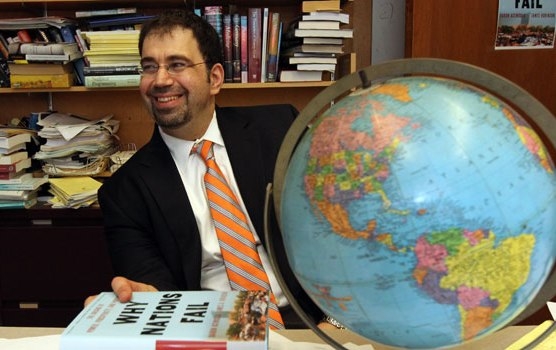 A number of representatives of Turkey’s ruling party stated that awarding the President’s Prize to an Armenian economist is “a message addressed to the Prime Minister of Turkey Recep Tayyip Erdoğan and the Government.” Among other things they recalled the article Daron Acemoğlu published in the New York Times titled “Development Won't Ensure Democracy in Turkey”.

Daron Acemoğlu was born on September 3, 1967 in Istanbul, Turkey. He is an Armenian economist now living in the USA. Currently the Elizabeth and James Killian Professor of Economics at Massachusetts Institute of Technology in Boston he is among the 10 most cited economists in the world according to IDEAS/RePEc. Winner of the 2005 John Bates Clark Medal. His most cited article is "Colonial origins of comparative development" (2001). His principal interests are political economy, development economics, economic growth, technology, income and wage inequality, human capital and training, and labour economics. His most recent works concentrate on the role of institutions in economic development and political economy.

Acemoğlu was born in Istanbul, Turkey to a family of Armenian descent. He graduated in 1986 from the Galatasaray High School in Istanbul, going on to gain his B.A. degree from the University of York, UK and his M.Sc. degree in Econometrics and Mathematical Economics and then his Ph.D. degree in 1992 from the London School of Economics.

He was a lecturer in economics at the LSE from 1992–1993, before becoming a member of the M.I.T. faculty in 1993. He was promoted to full professor in 2000, and was named the Charles P. Kindleberger Professor of Applied Economics in 2004. He is a member of the Economic Growth program of the Canadian Institute of Advanced Research. He is also affiliated with the National Bureau of Economic Research, Center for Economic Performance, International Growth Centre, and Centre for Economic Policy Research. Acemoğlu is the co-editor of Econometrica, Review of Economics and Statistics, and associate editor of the Journal of Economic Growth, and an editorial committee board member of the Annual Review of Economics. He was elected a Fellow of the American Academy of Arts and Sciences in 2006.