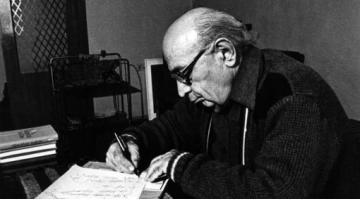 
YEREVAN, AUGUST 9, ARMENPRESS. On the initiative of "Hamo Sahyan Scientific-Cultural Centre" NGO four volumes of Hamo Sahyan's works will be published advancing the 100th anniversary of the prominent author. The publication will be ready by April, 2014.

In a conversation with"Armenpress" the Chairman of "Hamo Sahyan Scientific-Cultural Centre" NGO, Doctor of Philology Shchors Davtyan noted that the publication of the four volumes is realized in association with the Ministry of Culture of the Republic of Armenia.

Among other things the Chairman of "Hamo Sahyan Scientific-Cultural Centre" NGO, Doctor of Philology Shchors Davtyan emphasized: "All the significant works by the poet will be enclosed in those four volumes. Each of the volumes will contain handwriting of the poet and about 15-20 photos."

Hamo Sahyan was born on April 14, 1914, in Lor village of the Syunik Province. Sahyan was a prominent Armenian poet and translator. He graduated from the Pedagogical institute in 1939. In 1941 he returned to Yerevan, then served in the Soviet Navy during World War II.[1] He worked in "Avangard" and "Vozni" newspapers, edited "Grakan tert". The first collection of his poems was published in 1946. Sahyan was awarded by the State Prize of Armenia for his "Sezam, batsvir" (1972) book. Hamo Sahyan passed away on July 17, 1993, in Yerevan.