New flats are built for Syrian Armenians in Nagorno-Karabakh 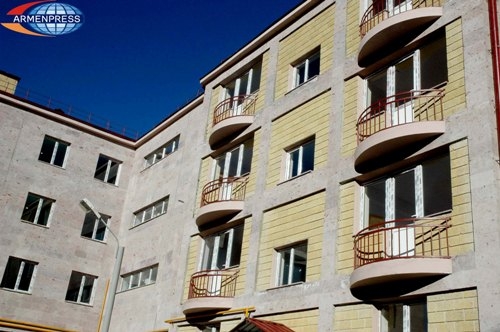 
YEREVAN, AUGUST 5, ARMENPRESS: In Cashatagh region of Nagorno-Karabakh Republic new flats are built for Syrian Armenians. “Armenpress” was informed from head of re-settlement department of Cashatagh region Robert Matevosyan that the flats are built in several districts. “In Kovsakan there is already a house with 12 flats and four private residences where already live Syrian Armenians. We have one private residence in Ishkhanadzor and 3 flats in Berdzor. At this moment construction works continue in all districts,” said Matevosyan informing that the flats and private residences in support of “Tufenkyan foundation”, “Help your brother” and other programs.

The apartment building in Kovsakan is ready for 80 percent. The building in Ishkhanadzor is ready for 60 percent and construction works in Berdzor have just begun.Robert Matevosyan assured that all buildings will be settled this year. “The future residents of the houses now live in hotels which are under the disposal of administration. Some of them live with their relatives: for example a family which already has a flat lives with brother’s family who are waiting for the preparation of their flat,” he mentioned.

Syrian Armenians who live in Ishkhanadzor already began to be involved in agricultural sphere. There is a family of doctors in Kovsakan who work in local hospital. Major part who live in Berdzor are artisans. Drivers and etc. “All people who have a wish to work find a work, we support them. Those who want to work in state bodies receive such opportunity. In that case salary is less compared with Syrian salary but the attitude towards them is very good. They are patriotic people and have kept their traditions,” mentioned head of re-settlement department of Cashatagh region Robert Matevosyan joking that the wish of Syrian Armenians to live in Cashatagh is big as it is the safest place of Armenian world. He also informed that in the region live 38 Syrian Armenian family who already expressed wish to live in newly-built apartments. Other 10 families informed about their arrival in future. “We are sure that there will be many wishers. When they know that the problem of living place and workplace is solved Syrian Armenians will certainly come. Children also feel themselves perfect. The problem of their education is solved,” he stressed. He also informed that there is a Syrian Armenian boy who serves in armed forces of Nagorno-Karabakh on voluntary basis.