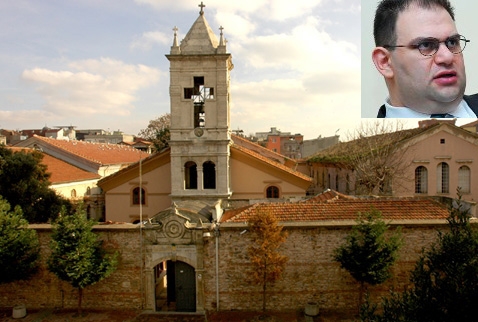 
, MAY 5, ARMENPRESS: The shots fired on May 5 in the yard of the Armenian Church, located nearby the Armenian Patriarchate in , did not cause any material and physical damages. Armenpress was reported by the Editor-in Chief of the “Zhamanak” (Times) Newspaper Ara Kochunian that the shots undermined the peace of the believers participating in the liturgy held in the church. “There is no danger threatening the security of the Armenian churches. This is a separate case, which does not give reasons to worry, though it should not be ignored”, - said the Editor-in Chief of the “Zhamanak” Newspaper.

Because of the day-off, Armenpress could not contact the Armenian Patriarchate in . Nevertheless, Ara Kochunyan stated that the Patriarchate did not make any announcement on the case.

At about 12:30 am on May 5 a group of unknown persons fired seven shots during the liturgy at the entrance of the Church of the Armenian Patriarchate in , in Gum Gapu district and then fled away.

As reported by the Turkish Radikal, the representative of the Armenian community of Constantinople Karo Palyan stated that after the shots the Armenians of Constantinople, participating in the liturgy and accompanied by children, panicked. Fortunately, no one was hurt in the attack. He said that the case is investigated by the bodies struggling against terrorism and security organizations of , which try to make the fotorobot of the criminals. The criminals, unfortunately, did not say anything and did not sound any slogan.