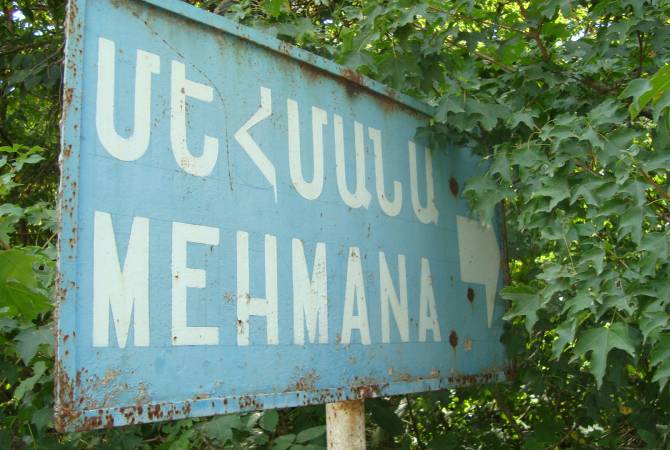 
YEREVAN, JULY 7, ARMENPRESS. The video broadcasted by CBC TV Azerbaijan on July 5 and spread with Greek translation by the Embassy of Azerbaijan in Greece regarding the village of Mehmana of Artsakh and its historical-cultural heritage is nothing more than an irritating attempt to “export” Azerbaijan’s policy of Armenophobia and hatred against Armenians to other countries, the Embassy of Armenia in Greece said in a statement on social media.

“The village of Mehmana of Artsakh’s Martakert region has been founded by four Greek miners, who, according to their descendants, were Greeks from Pontus who survived the genocide. Before the war Greeks and Armenians have lived here side by side, there have been many Armenian-Greek families.

In 1992, as a result of the large-scale aggression unleashed by Azerbaijan against Nagorno Karabakh, Azerbaijan captured the village of Mehmana together with the entire Martakert region, forcing its Greek residents together with thousands of Armenians to leave their homes”, the statement says.

The statement adds that head of the Greek Community of the Republic of Artsakh NGO and famous TV reporter in Artsakh Sofi Ivanidis, whose parents were from Mehmana, says that during the Artsakh war the Greeks in Artsakh have applied to the Greek government requesting to accept them, and the government approved their request. And in 1992 many Greek-Armenian families of Artsakh moved to Greece. However, her parents decided to stay in Artsakh, despite the fact that they had a document on permanent residency provided by the Greek government. “We stayed in Artsakh, faced with everyone the difficult days of the Artsakh war and won with an honor”.

A year later Mehmana was liberated, and its residents had a contribution to it. The village, that was completely destroyed by the Azerbaijani armed forces, has been reconstructed and some of the Greeks returned back, including the 80-year-old grandfather of Sofi Ivanidis, who died in the village 15 years later.

“The facts of “encroachment” of the Greek orthodox church and the Greek historical-cultural heritage in the video broadcasted on Azerbaijan’s CBC TV channel are also distorted and have nothing to do with the reality because that church is a Russian church located in Gevorgavan in Martuni region, which, has been destroyed during the first war and then during the 2020 war unleashed by Azerbaijan, by not giving a chance to restore it.

The video is deliberately silent on one more orthodox church destroyed by the Azerbaijani authorities, that is the Greek orthodox (Russian) Temple of the Great Martyr George the Victorious in Shushi, where Greeks were also visiting”, the statement says.

The Embassy called the video another attempt of the Azerbaijani propaganda machine to deviate the international community’s attention from the policy of that country.

“With these steps Azerbaijan continues to challenge the entire civilized community, despite the 2021 December 7 decision of the UN International Court of Justice on applying urgent measures, which clearly obliges Azerbaijan to “take all necessary measures to prevent and punish acts of vandalism and desecration towards Armenian cultural heritage, including churches and other places of worship, monuments, landmarks, cemeteries and artifacts”.

In order to protect the historical-cultural monuments of Artsakh and save them from further vandalism, the intervention of the international community, particularly UNESCO, the fact-finding mission of which is constantly obstructed by Azerbaijan, is more than urgent today”, the Embassy said in its statement.