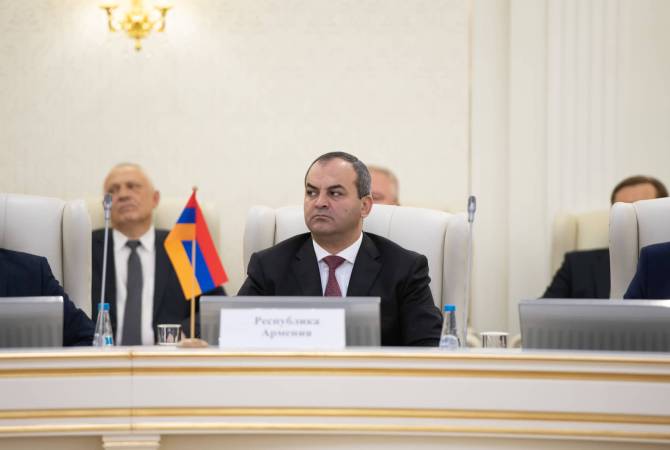 As ARMENPRESS was informed from the Prosecutor General’s Office, within the competences of the prosecutor's offices of the three countries the sides discussed ways to find new opportunities for resolving the existing humanitarian and legal issues arising as a result of the war unleashed against Artsakh and issues related to the implementation of the agreements reached during the previous two meetings on the same agenda in 2021.

The parties stressed the importance of maintaining the trilateral format of the Prosecutor Generals as an effective platform for maintaining contacts in the legal sphere for ensuring stability, legitimacy, de-escalation, basic living rights and security of the population in the region.

Prosecutor General of Armenia Artur Davtyan noted that despite the agreement reached during the previous trilateral meetings on the incidents on the contact line of the Armenian-Azerbaijani armed forces and on the mediated exchange of operative information on the ongoing investigations, ceasefire violations continued, resulting in human casualties, new threats to the realization of vital rights and security have been created for the civilian population.

As an obvious example, the Prosecutor General of Armenia referred to the actions carried out by the Azerbaijani armed forces in the direction of Parukh settlement, as a result of which 3 servicemen were killed and 16 servicemen were injured. Arthur Davtyan stressed the need to properly investigate the actions in the village of Parukh, as well as other cases of gross violations of the ceasefire.

Prosecutor General of Armenia Artur Davtyan raised especially the issue that the 8th point of the trilateral declaration of November 10, 2020 has not been implemented. He stressed that the speedy return of 38 Armenian detainees confirmed by Azerbaijan is crucial for restoring trust between the parties, establishing lasting peace in the region and establishing security guarantees, emphasizing the full fulfillment of the humanitarian requirements of the trilateral declaration by Armenia.

An agreement was reached to continue the talks with the mediation of the Russian side in order to fully resolve the humanitarian issues in a short time.