There is no political crisis in Armenia – FM on ongoing protests 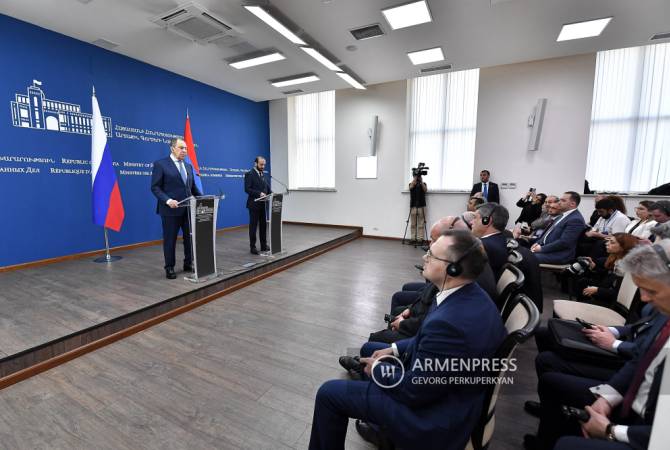 
YEREVAN, JUNE 9, ARMENPRESS. Foreign Minister of Armenia Ararat Mirzoyan commented on the ongoing protests in the country, stating that there is no political crisis in Armenia.

During a press conference today with his Russian counterpart Sergei Lavrov in the Armenian Foreign Ministry, Mirzoyan told a reporter that he can substantiate his statement by two facts. “Firstly, snap parliamentary elections were held last summer, where the citizens of Armenia gave very clear answers to a number of questions and solved the political crisis that really existed that time. It’s worth noting that these elections were recognized as democratic and transparent by all observer missions. So, this shows that citizens undoubtedly had a chance to express their position and make a decision.

Secondly, we follow, as far as I managed to follow, the small number of people participating in rallies, perhaps, doesn’t show that these rallies are supported by the citizens of Armenia. But I want to note that Armenia is a democratic country, and everyone has a right to hold peaceful rallies”, the FM said.

Touching upon the logical sides of this process, the FM said he could present his own, personal position. “I see some problems with sound judgment here and I can state why. Firstly, that political forces have a chance to run their activity in the parliament and strongly criticize the authorities and ask the sharpest questions, which, unfortunately or fortunately, they do not use. It is their right again.

And here I want to state that strangely we have not seen statements that, if our government resigns, and the power is somehow transmitted to these forces, they are going to cancel, for example, the November 9 trilateral statement, or the trilateral statements of 2021 January 11 and November 26, or they are going to withdraw from the delimitation process, or they are going to suspend the process of unblocking the regional communications, etc. In other words, if such an approach was announced, perhaps it would have been logical, because I have already presented our approach and it has been announced long ago. And I suppose that it would have been logical if these aspiring political forces have had opposite positions on these key matters. As I said, I didn’t manage to follow much, but as far as I managed, I didn’t meet any talk on suspending the processes I mentioned or withdrawing from that processes, which allows me to suppose that the topic that is being discussed is just a way and occasion of manipulation by the opposition”, he said.