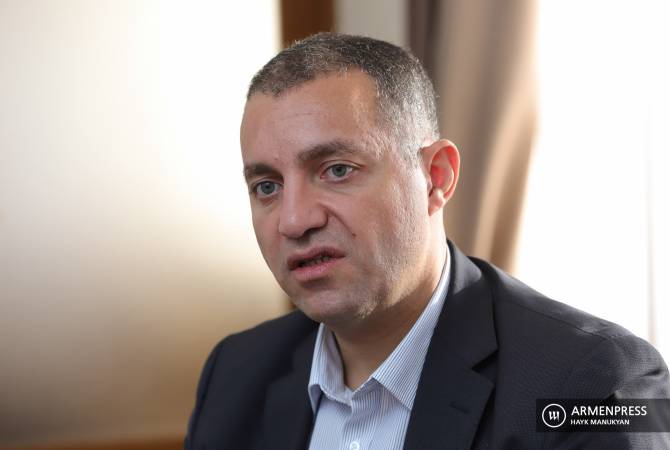 
YEREVAN, MAY 26, ARMENPRESS. Minister of Economy Vahan Kerobyan reacted positively to the acquisition of the 65,03% of the Armenian Securities Exchange (AMX) by the Warsaw Stock Exchange.

Kerobyan said that the Warsaw Stock Exchange is the most active and largest stock exchange in Eastern Europe.

“The contribution of their experience in the Armenian capital market can’t be overestimated. We believe that their arrival will bring great benefit the development of our capital market. We already see significant interest from private companies for instruments of the capital market,” Kerobyan said.

He said that prior to 2018 there were very few companies in the non-financial sector who were working transparently with profit. The accepted business model, before 2018, was to generate revenue by saving taxes, he said. But starting from 2018, companies have broad opportunities to work with profit and transparently.

“I can’t say that it has become transparent entirely, but we see that the number of companies who are properly undergoing audit is significantly growing. This is the base of the companies who should be active participants of the capital market,” Kerobyan said.

On May 24, the Board of the Central Bank of Armenia approved the acquisition of the Armenian Securities Exchange (AMX) by the Warsaw Stock Exchange.

According to the agreement, the Warsaw Stock Exchange (GPW) will acquire 65.03% of AMX.

The Armenian Central Bank issued the following press release on the acquisition:

“On its May 24 sitting, the Board of the Central Bank of Armenia gave its consent to the acquisition of the Armenian Stock Exchange by the Warsaw Stock Exchange. According to the agreement, the Warsaw Stock Exchange (GPW) will acquire 65.03% of shares of the Armenian Stock Exchange (AMX) (967 shares in total). The Central Bank of Armenia will maintain 25.02% of shares, and the remaining 9.95% are the AMX's own shares. The value of the transaction will be about AMD 873 million, a part of which (about AMD 499 million) will be paid after signing the Share Purchase Agreement, and the rest, after completion of processes established by the Share Purchase Agreement.

The GPW announced about its plans to acquire the AMX in September 2020, after which necessary studies were carried out, a development plan for the next five years was developed, and necessary corporate approvals were obtained.

Development program prepared by the GPW provides for a number of measures aimed at the improvement of capital market infrastructure, including development of the trading system, expansion of the stock exchange and the Central Depository services, as well as introduction of state-of-the-art technological solutions.”

The GPW is the largest and the developed market in Central and Eastern Europe. The GPW organizes trading in stocks, bonds, derivatives, fund shares and other instruments. The GPW is a public company, the shares of which have been listed since 2010 with a capitalization of about 320 million euros.

The AMX is the only operator in the regulated securities market in Armenia, which organizes trading of both securities and other financial instruments. The AMX is the 100% shareholder of the Central Depository of Armenia. 90.05% of the AMX shares belong to the Central Bank of Armenia, and the remaining 9.95% are the AMX's own shares.