My dream is to go to a pharmacy and see the drug I have discovered. 10 questions to a scientist | ARMENPRESS Armenian News Agency

My dream is to go to a pharmacy and see the drug I have discovered. 10 questions to a scientist 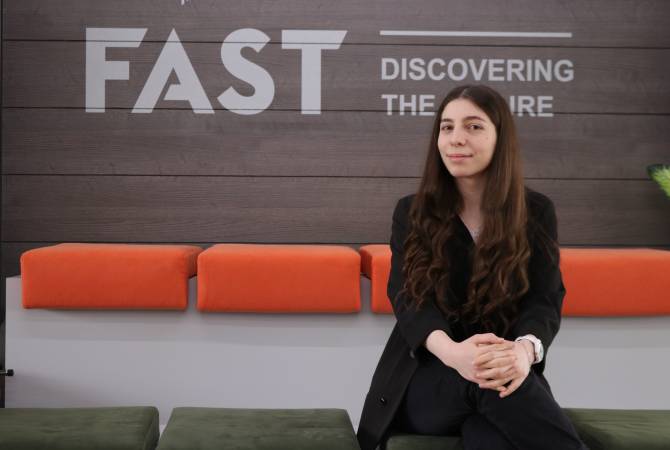 
YEREVAN, MAY 25, ARMENPRESS. Young researcher Irina Tirosyan had decided to pursue science since early childhood. She has had plenty of riveting experiences in her career but her enrollment in the AI Bootcamp, a course in data science and artificial intelligence, by the Foundation for Armenian Science and Technology (FAST) appeared to be a turning point that predetermined Irina’s future career path. She could never envision before that, by going for computer science, she would deal with the discovery of drug-like candidates. Since the year 2020 Irina has been working for Denovo Sciences as a data scientist, also giving lectures at the American University of Armenia in parallel to her scientific activity.

What was the stimulus behind your decision to become a scientist?

I’ve been curious since childhood, and have always wanted to figure out what this or that substance was made of, and how it worked. I kept disassembling and reassembling toys and any other items at hand so as to understand the mechanism. Many will definitely recall small kits we had back in childhood to conduct chemical experiments. Exploring the new was my element.

I was into maths at school. To my mind, maths is a fundamental science which best explains the composition of things and their connection through rules and formulas. When I had to choose a future profession, I opted for the Department of Data Science at the American University of Armenia. The reason is data science enables one to work in diverse fields.

I started work throughout my university studies. My first experience was with a large American company Wolfram Research, also did an internship in machine learning research at PicsArt.

I both studied and worked as an assistant to the professor while doing my Master’s degree. This was when FAST organized the AI Bootcamp which I took part in with great pleasure, having even accomplished a project together. Later on, I was offered to work for Denovo Sciences, a company created within the framework of the ASCENT (Advanced Solutions Center) program by FAST.

Were there any people around you who inspired or encouraged you to pursue science?

I didn’t have any scientists in the family or among my relatives before. My parents simply respected my resolution. My career orientation did not surprise them in the slightest as they perfectly knew my personality. I am extremely grateful to them for all the support I am given.

Would you highlight any scientist as a role model?

Certainly. For instance, the co-founder and CEO of Denovo Sciences Hovakim Zakaryan, who breaks all the stereotypes about a scientist. He is young, has a family, and has his preferences and interests. At the same time, he does science, and runs his own laboratory. Hovakim Zakaryan is an exemplary scientist for many. Having him on your team is the best inspiration and motivation.

Would you please elaborate on the nature of your work as a data scientist at Denovo Sciences?

We deal with the discovery of medicine candidates. Our team incorporates biologists, chemists, as well as data scientists. Conventionally, data scientists have to master enormous amounts of information regarding medications or other relevant substances, synthesize plenty of molecules, to carry out various experiments, without any certainty about the ultimate result. Newer experiments might be needed which require time-consuming work and huge financial investments.

We do not have to synthesize innumerable molecules and then conduct laboratory experiments. Instead, we have worked out algorithms based on artificial intelligence which accelerate the process of drug discovery without the need for those databases.

The algorithm singles out quality molecules, creates simulations, and then we have them synthesized and tested to find out how they affect the target of this or that disease and have them filtered, which saves a lot of time and financial resources. It is also worth noting that we constantly improve algorithms which enable research of the targets of diverse diseases, whilst conventional data science is constrained by the limits of a database.

Would you recall any milestone in your career path?

I would rather mention my participation in the AI Bootcamp held by FAST, where I first met my future teammates and got to know the nature of the work. I would have never imagined before I could discover novel medications.

Who is a scientist for you?

There is a stereotype that in case you have no scientific degree, you can never be a scientist, but I tend to believe that if you apply scientific methods, discover new schemes, and have your own research techniques, that’s enough to be considered a scientist. A contemporary scientist is well-rounded, their work is continuous, and it does not merely imply research. Science is not up in the air; practical application nowadays has become equally important as theory.

Haven’t the stereotypes you mentioned above ever got in your way?

Most people would get surprised to see a girl pursuing science in the past but a lot has changed in social conceptions so far. These days doing science is trendy.

What motivates you to get up in the morning?

Thoughts about the coming day, that it can be better than today or yesterday. Relentless perfection of your skills, gradual results of your work, that’s beyond words. To explore the new, to be a forerunner…

What would you tell a child who wants to pursue science?

I would urge their closest circle to give them the opportunity, to encourage them to never give up on it to keep a child’s interest and love for science awake up to the point when they are capable of pursuing their career path.

What is your dream as a scientist?

To go to the chemist’s and see the drug I have discovered.

Previous interviews of the "10 questions to a scientist" series are below:

From Ashtarak to Yerevan, then to Milan and Basel, chasing the childhood dream of becoming a scientist. Smbat Gevorgyan

Any beneficial discovery for the sake of humankind would be regarded as a career peak for me. Ella Minasyan

I decided to carry on with the family tradition of pursuing science. Karen Trchunyan

Nothing brings as much joy to a person as the feeling of the reward of a scientific result. Ani Paloyan

The story of Anoxybacillus karvacharensis found in the geothermal spring of Artsakh as a source of inspiration. Diana Ghevondyan

In an American lab 20 years ago I felt like in a Hollywood movie. Anna Poladyan

Science excelled all jobs because it is perspective: Sargis Aghayan

The easiest way to change the world is to do science: Sona Hunanyan