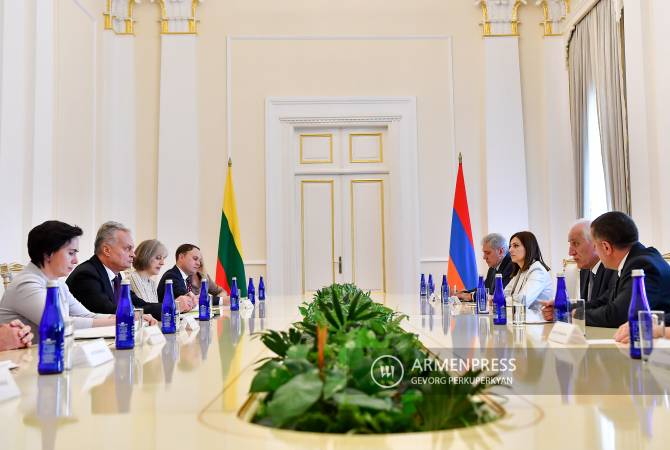 
YEREVAN, MAY 20, ARMENPRESS. President of Lithuania Gitanas Nausėda vowed during his meeting with Armenian President Vahagn Khachaturyan to provide every support for the preservation of the Armenian cultural legacy that has gone under Azerbaijani control.

The presidents held a joint press conference after their meeting in Yerevan.

President Vahagn Khachaturyan said that the high-level visits between the two countries show the strong ties coming from the depth of centuries and the continuation of relations based on similar value system, as well as the determination to expand bilateral cooperation.

The presidents had a comprehensive discussion on the current state and prospects of the Armenian-Lithuanian relations, as well as a broad circle of agenda issues relating to bilateral friendly relations.

“The readiness to deepen inter-state relations was reiterated from both sides. Special attention was paid to the possibilities of increasing trade volumes and deepening bilateral economic cooperation. In this context we discussed prospects of partnership in industry, IT, renewable energy, agriculture and other areas,” President Khachaturyan said.

Khachaturyan said they also discussed Armenia’s efforts aimed at establishing lasting peace in the region. “The efforts of Lithuania and Armenia are identical in this matter. The need for preserving the Armenian cultural monuments in Artsakh and under the Azeri control was specially emphasized. President Nausėda vowed to provide every support for the preservation of the Armenian Christian cultural legacy,” the Armenian President said.

In this context they highlighted the need for a visit of the UNESCO expert mission to Artsakh to the territories that have gone under Azeri control.

The Armenia-EU partnership agenda and projects were also discussed.