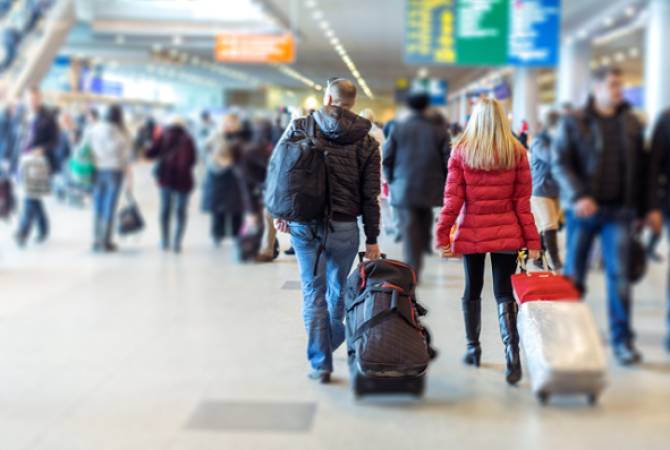 
YEREVAN, MAY 19, ARMENPRESS. Armenia is seeing a large influx of both Russians and Ukrainians ever since the Russian invasion into Ukraine began in late February - in what Moscow describes as a "special military operation" and Kiev says is an unprovoked attack.

Now, 200 Ukrainian citizens have already requested asylum in Armenia. More than half of the asylum seekers are ethnic Armenians.

Nelly Davtyan, the Public Relations Director at the Migration Service of Armenia, told ARMENPRESS that 5938 Ukrainian citizens arrived to Armenia in the first quarter of 2022 (2079 in January, 1597 in February and 2262 in March), compared to the previous year’s 2531. Moreover, most of them (5631) left Armenia in the same first quarter. And from the remaining over 300 Ukrainians 200 applied for asylum.

“Right now we have more than 200 people who’ve applied for refugee status, 60% of them are ethnic Armenians, the other 40% are ethnic Ukrainians,” Davtyan said.

If the asylum seekers get the refugee status, they will have the right of legal residence in Armenia and a conventional travel document which is valid in nearly 160 countries who have the same asylum procedures. Right now, the applications are being processed and could take up to 3 months – the standard processing time. However, whenever the first precedent decision is made, the rest (which are similar cases) will proceed faster.

Meanwhile, Davtyan added that the Russian citizens who’ve arrived in Armenia are exempt from the requirement of obtaining work permit and residency status because they are citizens of an Eurasian Economic Union country. They are entitled to stay freely for up to 180 days.

“If their work activities require longer time, the Migration Service gives them a document stating that they are residing and working in Armenia legally. A certificate in the form of a plastic card is issued. It is issued for free in a rather short period of time, from a week up to ten days,” Davtyan said.

The applications are being received online at workpermit.am. The card is issued with the same term as the applicant’s work contract, for example: if a Russian citizen has signed a 5-year work contract in Armenia with a company, they will receive a 5-year certificate. If the contract is signed indefinitely, the standard term for the card is 1 year with the possibility of extension.

However, 138,111 Russian citizens have left Armenia in the same first quarter. The remainder is around 4000. Davtyan, however, emphasized that this doesn’t mean that there were only 4000 Russian citizens in Armenia as of the quarterly data. “This is a small number, because in January and also in February the departure of Russian citizens was very large. It is possible that this departure also reflected the Armenian work migrants who hold Russian citizenship, who leave for Russia in spring and winter for work,” Davtyan said.

Meanwhile, according to the State Registry data, more than 1500 Russian citizens registered businesses in Armenia in the first quarter.  “I don’t think 1500 out of 4000 would get registered as legal entities. The [4000] number is actually many times more,” Davtyan said.

Russia attacked Ukraine in late February, following what Moscow describes as Kiev’s failure to implement the terms of the Minsk agreements, first signed in 2014, and Moscow’s eventual recognition of the Donbass republics of Donetsk and Lugansk. The German- and French-brokered protocols were designed to give the breakaway regions special status within the Ukrainian state.

The Kremlin has since demanded that Ukraine officially declare itself a neutral country that will never join the US-led NATO military bloc. Kiev insists the Russian offensive was completely unprovoked and has denied claims it was planning to retake the two republics by force.