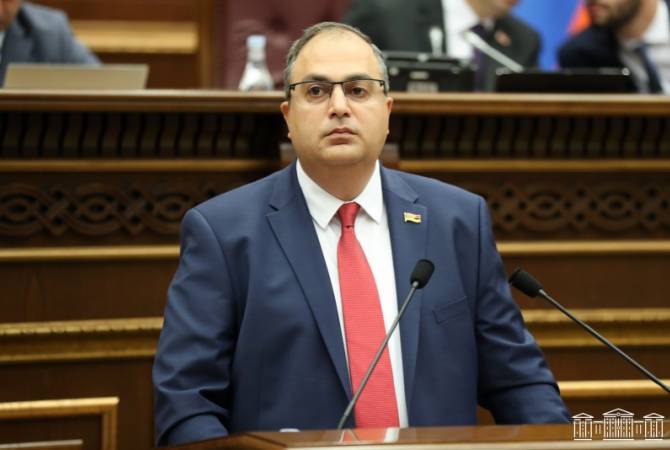 In his speech, Vardanyan said that the Gray Wolves radical terrorist organization is responsible for a series of terroristic attacks and other crimes committed against Armenians, Kurds, other minorities, an organization which is allegedly connected to the assassination attempt of Pope John Paul II.

“April 24 Armenians all over the World were commemorating the memory of the victims of the Armenian Genocide organized and perpetrated by the Ottoman authorities in such cruel and inhuman manner that the international community was obliged to invent a new term for qualification of such international outrages – crimes against humanity. Despite the fact that the consequences of the Armenian genocide are still echoing within all the Armenian community and despite the fact that even today 107 years later this issue is still quite sensitive for all of us, the Republic of Armenia from the very beginning of its independence has declared its policy of normalization of relations with Turkey without any precondition. We are consecutively following this path and reiterating our willingness to normalize bilateral relations. But are our counterparts as sincere in this process as we are? I would like to show you something. This is a sign of Bozkurt, so called Grey Wolves, a radical terrorist organization responsible for a series of terroristic attacks and other crimes committed against Armenians, Kurds, other minorities, an organization which is allegedly connected to the assassination attempt of John Paul II, the Pope and so on. You may ask why I am showing you this sign and what is the interrelation between my speech and progress report. No dear colleagues, I am not deviating from the discussion. We are discussing the progress of our Organization, progress of fulfillment of obligations, progress in protecting our values. I am showing this to you because just two days ago Mr. Mavlut Chavusoglu, the incumbent Turkish Foreign Minister has shown this to the participants of the peaceful demonstration in Uruguay demanding the recognition of the Armenian Genocide. It is strange that a high level European diplomat and politician promotes such a sign. It becomes even more unacceptable when it is done by a former President of the Parliamentary Assembly, a person who here in this hemicycle spoke about democracy, human rights and rule of law. The person whom all of us gave support and right to represent us all and disseminate ideas of the Council of Europe and protect the European values allows himself to promote such a radical symbol.

It’s also worth mentioning that this kind of actions endanger the possible confidence building process among the two societies.

Here I would like to once again state clearly that we in Armenia are very devoted to the European values and we are continuing to do our best to normalize Turkish-Armenian relations expressing hope that our Turkish counterparts will have enough will to open the mutual border and establish normal relations with Armenia and contribute to the de-escalation and building of sustainable peace in our region,” Vardanyan said.

In a video posted on Twitter Cavusoglu is seen smiling and making the gesture of the ultranationalist Turkish Grey Wolves organization, taunting the demonstrators.

Cavusoglu's move was condemned by the President and Foreign Minister of Uruguay.