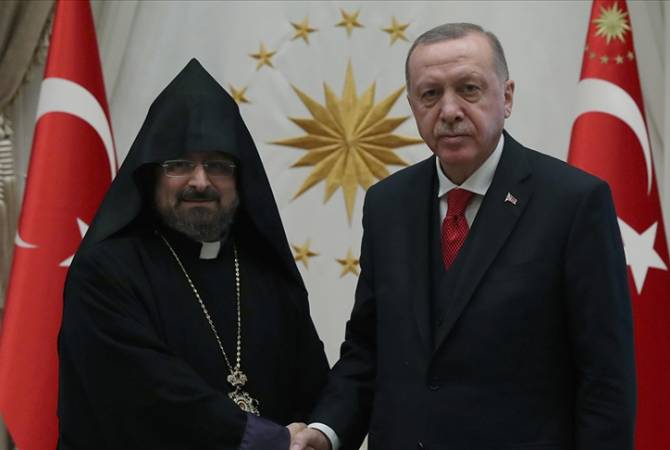 
YEREVAN, APRIL 24, ARMENPRESS. On the 107th anniversary of the Armenian Genocide, the Turkish President Recep Tayyip Erdogan released a statement addressed to the Armenian Patriarch of Constantinople Sahak Mashalyan.

Erdogan once again avoided calling the genocide by its name and again misrepresented the Armenian Genocide as a “painful reality that took place during the years of World War I”.

“Today you’ve gathered under the roof of the Armenian Patriarchate of Istanbul to commemorate the Ottoman Armenians who lost their lives in the difficult conditions of World War I. "I respectfully commemorate the deceased Ottoman Armenians once again, and convey my sincere condolences to their surviving relatives,” Erdogan told the Armenian community of Istanbul in the statement.

Like in his statements of previous years, Erdogan again said that “the final years of the Ottoman Empire during World War I were a very painful period for millions of Ottoman citizens.”

Erdogan called for “healing the wounds of the past together and strengthening human bonds” and “building the future together.”

The Turkish president also touched upon the recent normalization process between Yerevan and Ankara, saying: "I know that the normalization process is sincerely supported by our citizens of Armenian origin, who favor close cooperation between the two neighboring countries, and I attach great importance to this."

"I expect you to make a strong contribution to the evaluation of this historical opportunity that has emerged in the name of permanent peace and stability in our region after many years”.

16:31, 06.30.2022
2085 views Statements of Turkish officials that they coordinate the process with Azerbaijan are strange – Armenia’s Special Envoy