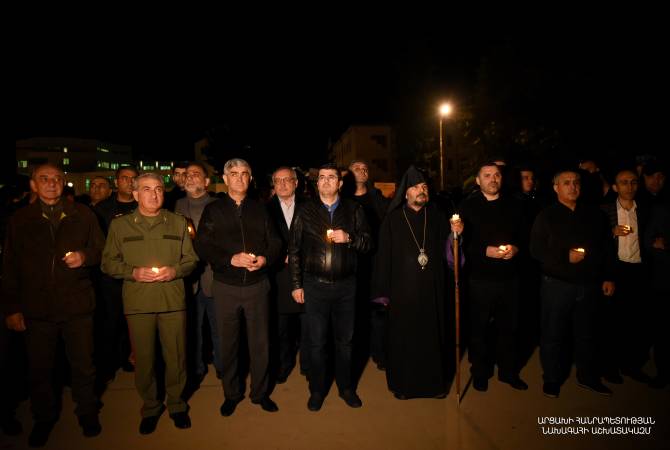 
YEREVAN, APRIL 22, ARMENPRESS. President of Artsakh Arayik Harutyunyan addressed a message on the occasion of the Armenian Genocide Remembrance Day, his Office said.

The message reads as follows:

In Artsakh, as in Mother Armenia and in various parts of the world, where at least one Armenian lives, we mourn and commemorate the memory of the victims of the Armenian Genocide, the 1.5 million innocent Armenians who fell victim to a monstrous plan carried out by the Ottoman Empire in 1915.

It was a crime not only against the Armenian people, but also against the whole of humanity, a stigma for all those who have not yet acknowledged and condemned it, paving the way for new massacres and crimes.

Over a centennium onward, we are once again facing serious challenges, once again having to fight for national and universal values, for the protection of fundamental human rights and freedoms, for the full realization of our natural right to live freely and independently on our own soil.

Today, in front of the whole world, Azerbaijan continues to explicitly pursue an anti-Armenian and belligerent policy towards the people of Artsakh, grossly violating and trampling all the norms and principles of universally accepted and recognized international law.

The progressive mankind of the world must stand by the peaceful population of Artsakh, because we have no alternative, we are determined in our decision to live and create on the land of our ancestors, a land sanctified by the blood of thousands of sons of the Armenian people.