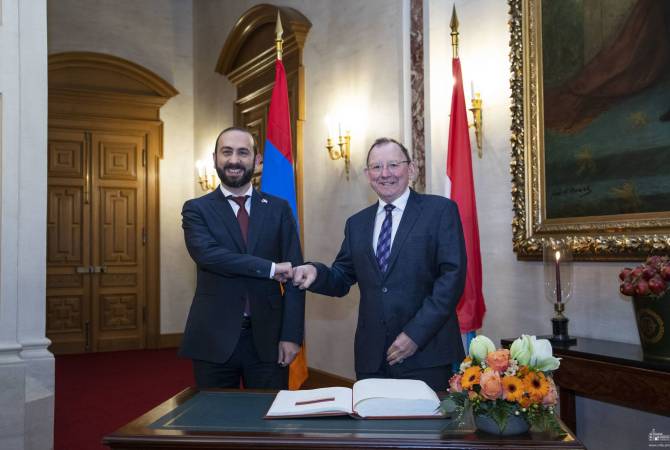 
YEREVAN, JANUARY 26, ARMENPRESS. Foreign Minister of Armenia Ararat Mirzoyan met today with the President of the Chamber of Deputies of Luxembourg Fernand Etgen during his official visit in Luxembourg, the Armenian MFA reports.

The meeting was attended also by the representatives of all political parties represented at the Chamber of Deputies.

Ararat Mirzoyan and Fernand Etgen praised the current productive cooperation between Armenia and Luxembourg, also at the inter-parliamentary level. The sides emphasized the importance of intensifying the ties between the parliamentary friendship groups and at international parliamentary platforms, particularly within the OSCE.

They also touched upon the implementation of the Armenia-European Union Comprehensive and Enhanced Partnership Agreement (CEPA). FM Mirzoyan reaffirmed Armenia’s commitment to consistently develop the partnership with the EU within the frames of this agreement, in this respect highlighting the support of Luxembourg.

Regional security and stability-related issues were also touched upon at the meeting. Ararat Mirzoyan expressed gratitude for the adoption of resolutions by the Chamber of Deputies during and after the 2020 war launched by Azerbaijan against Artsakh, which were expressing support to the Artsakh-Armenians and the protection of their rights. The FM also highly appreciated the positions of the executive and legislative powers of Luxembourg on the necessity of repatriation of Armenian prisoners of war and other persons held in Azerbaijan.

The sides also discussed the ongoing democratic processes in Armenia and the latest regional developments.

11:29, 05.19.2022
2004 views U.S. recognizes role of population of Nagorno-Karabakh in deciding its future–Ambassador Tracy’s interview to ARMENPRESS