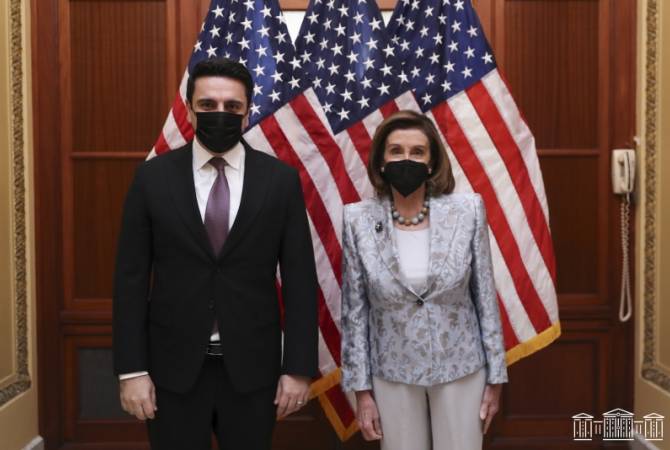 
YEREVAN, JANUARY 20, ARMENPRESS. Speaker of Parliament of Armenia Alen Simonyan met on January 19 with Speaker of the US House of Representatives Nancy Pelosi, the Parliament told Armenpress.

During the meeting Alen Simonyan presented the consistent progress towards strengthening democratic institutions and rule of law in Armenia following the 2018 Revolution. He highlighted the efforts of the Armenian authorities and parliament in fighting corruption, raising transparency and accountability, as well as emphasized the role of the free and fair elections in ensuring the irreversibility of reforms.

Alen Simonyan also informed that in 2018-2021 Armenia has improved its score in the Transparency International’s Corruption Perception Index, shifting from 35 to 49, and that the Freedom House estimated that the global freedom index has registered a positive growth. The sides reaffirmed that democracy is one of the key pillars of the Armenian-American partnership.

Speaker Simonyan also introduced a number of legislative reforms carried out by Armenia in concrete areas.

He also introduced Speaker Pelosi on the current situation in the region following the 2020 Nagorno Karabakh war. Alen Simonyan reaffirmed Armenia’s readiness to work towards establishment of long-term peace and security in the region. He stated that the Azerbaijani authorities continue to openly threaten Armenia’s sovereignty and territorial integrity and continue the encroachments against Armenia’s territory. The sides agreed that the final settlement of the Karabakh conflict could be achieved only with peaceful negotiations under the auspices of the OSCE Minsk Group Co-Chairmanship. Issues relating to the immediate release of the Armenian prisoners of war held by Azerbaijan, as well as the unblocking of all regional communications were discussed at the meeting.

The sides also discussed the Armenian-American inter-parliamentary relations and the expansion of partnership on this direction. In this respect Speaker Simonyan highly appreciated the activity of the Congressional Armenian Caucus, which has a bipartisan support and plays a vital role in strengthening the bilateral ties. Alen Simonyan expressed gratitude to Speaker Pelosi and her all colleagues for the valuable contributions to the recognition of the Armenian Genocide and to the adoption of respective resolution.

During the meeting Nancy Pelosi was bestowed with an Order of Honor on the occasion of the 30th anniversary of the establishment of the Armenia-US diplomatic relations for her significant investment in the development and strengthening of the bilateral friendly ties.