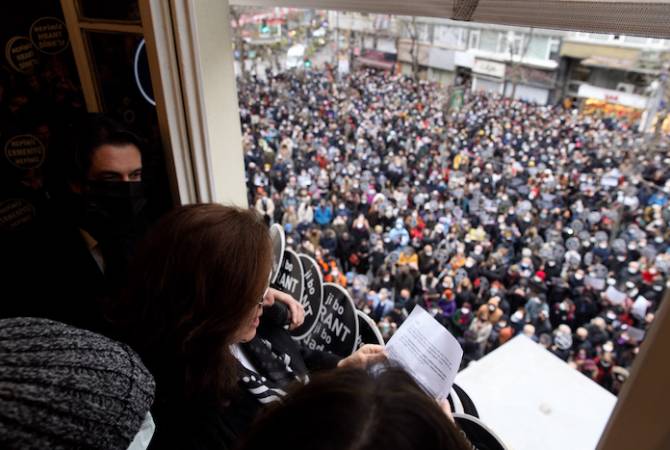 
YEREVAN, JANUARY 19, ARMENPRESS. A commemoration event was held on January 19 near the former editorial office of the Armenian newspaper Agos in Turkey, right where Hrant Dink, the late editor-in-chief of the newspaper, Istanbul-Armenian intellectual, was assassinated 15 years ago.

ARMENPRESS reports like every year, this year the intellectual's wife, Rakel Dink, made a speech, saying, "It has been 15 years since the shots fired from behind took you away from us. I can still hear you. Every time you told what they did to your people, you were accused of betrayal, of hitting from behind… You always said: "Love your enemies, do good to those who hate you, do good to those who curse you, pray for those who offend you." I pray.”

In her speech, Rakel Dink referred to the human rights violations that have intensified in Turkey in recent years, the attempts to silence non-governmental opposition figures, and their arrests.

"When you were buried, the voice of rebellion and rejection rising from here was not silenced, it will not be silenced. Workers, women, students, peasants are struggling again. One day they will unite again and become a torrent," the intellectual's wife said.

The ceremony was attended by Armenian MP Garo Paylan, Dink's friends and ideologues, intellectuals and activists. "We are here and we will continue to fight for justice," Dink's friends said.

Hrant Dink, an Armenian intellectual from Istanbul, was shot dead on January 19, 2007, in front of the editorial office of his own Agos newspaper. The shooter was Turkish nationalist Ogun Samast, who was only 17 years old at the time of the crime. The court sentenced him to 22 years in prison. The organizer of the murder, Yasin Hayal, was sentenced to life in prison on January 17, 2012. The real motives and those standing behind the crime are still unknown.