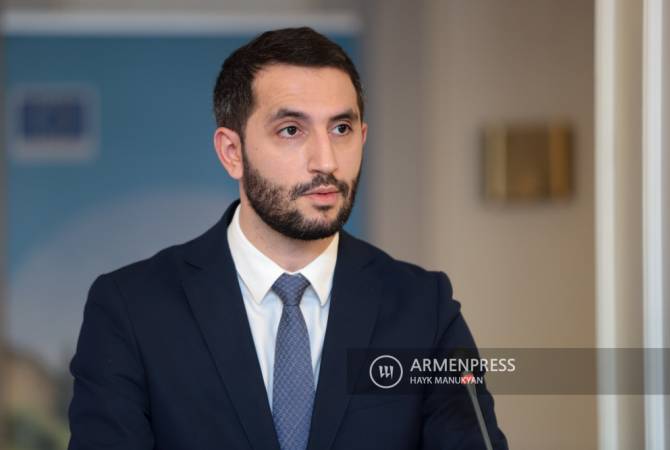 
YEREAN, JANUARY 18, ARMENPRESS. During their recent first meeting in Moscow, the special envoys of Armenia and Turkey for the dialogue between the countries exchanged views on how they see the process both from technical and also from content terms, Vice Speaker of Parliament of Armenia Ruben Rubinyan, who is Armenia’s special envoy, told reporters today.

He reminded that the foreign ministries of Armenia and Turkey have issued statements about the results of that meeting. “It is also fixed in the statement of the Turkish foreign ministry that the sides agreed to continue negotiations without preconditions. In general, that meeting was held in a constructive environment, but how the process will move on depends on the readiness of the sides and the continuation of constructiveness. Armenia has always stated that it is ready to normalize the relations with Turkey without preconditions, reach the opening of borders and establish diplomatic relations”, Rubinyan said.

Therefore, the sides agreed to hold negotiations and continue them without preconditions. As for how the process will move on, Rubinyan stated once again that it will depend on Turkey’s level of constructiveness, honesty and readiness.

“The desire of the Armenian side is to get involved in substantive talks as soon as possible because we are interested in the solution of the real problems. And this is, firstly, the opening of the border. We have stated and state the following: Armenia is ready to achieve the normalization of the relations without preconditions”, Rubinyan said.

“When we say that Armenia is ready to normalize the relations without preconditions, it means that the same is expected from the other side. What is the entire meaning of negotiations? There is situation which is not beneficial to us. I think that it is not beneficial to Turkey too. We want for the border to open. And we are ready to negotiate around it, the main essence of the negotiation is that there is a problem between the two countries, and it must be solved”, he said.

Commenting on his first meeting in Moscow with Turkey’s special envoy Serdar Kilic, Rubinyan said that they have tried to discuss the positive issues. “What will happen then depends on Turkey’s level of constructiveness, readiness to get involved in substantive talks. I can state that I assess what has taken place as of this moment normal, I assess the first meeting as constructive. But how the process will move on, it depends also on Turkey’s readiness, honesty and constructiveness”, Ruben Rubinyan said.

He informed that no agreement has been reached about the date and venue of the next meeting. “But, of course, one day that agreement will be reached, and I will inform”, he added.