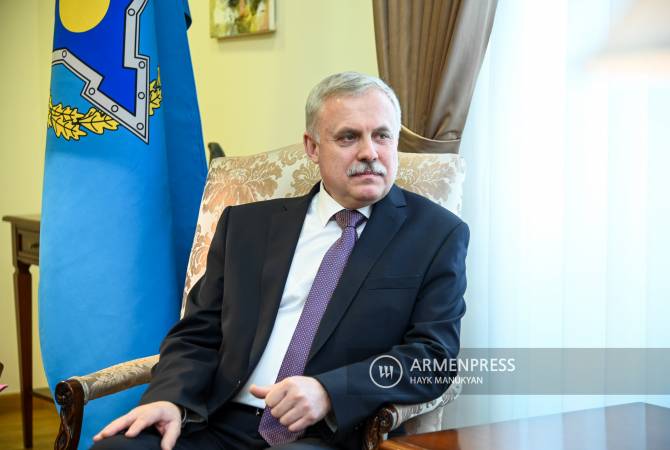 
YEREVAN, DECEMBER 21, ARMENPRESS. The Collective Security Treaty Organization (CSTO) considers the decision of Armenia and Azerbaijan to start the border delimitation and demarcation process as an important step to prevent the repetition of the current situation, CSTO Secretary General Stanislav Zas said in an exclusive interview to ARMENPRESS, ahead of his upcoming visit to Armenia scheduled on December 21-23.

Mr Zas said that the CSTO supports the Armenian government’s steps to solve the current situation with Azerbaijan through political and diplomatic means.

-Mr Zas, how do you assess the current level of development of the Collective Security Treaty Organization? What is the situation in the CSTO responsibility zone, what measures are being taken to ensure security, how does the organization solve its tasks and what is its vision for the future?

-The Collective Security Treaty Organization is a multifunctional structure that ensures the protection of its member states  on a collective basis not only from external aggression, but also, given the changing military-political developments, from all types of challenges and treats, including terrorism and extremism, drug trafficking, illegal migration, and also in the information security field.

Today we are witnessing growing crisis situations globally. Unfortunately, the level of a military danger is not decreasing for member states. The evidence of this, in addition to other circumstances, is the enlarging presence of military groups of NATO states directly near the western borders of the CSTO responsibility zone, as well as the development of the bloc’s military infrastructures and intensification of its military activity.

We are very concerned about the ongoing tense situation on the Armenian-Azerbaijani border where clashes and shelling are taking place regularly, as a result of which people are being killed, unfortunately.

In the Central Asia region, the developments in Afghanistan, where the situation remains complex, tense and unpredictable, present a danger. After the change in power in this country, the possibility of the strengthening of the internal armed resistance, the activation of terrorist organizations, the expansion of drug trafficking and the increase in uncontrolled migration is being observed. The country is facing a humanitarian disaster.

We always control the situation in these crisis points in order to respond on time to its potential deterioration. During the joint actions, firstly the CSTO Collective Forces’ military exercises we are developing practical measures aimed at ensuring the security in our responsibility zone. We are preparing the CSTO peacekeeping forces for their possible engagement to peacekeeping actions.

The relevance of other threats to the security of our countries is not decreasing as well – terrorism, drug trafficking, illegal migration, cyber threats. For this purpose the CSTO is taking a number of countermeasures, such as “CANAL’’ anti-drug regional operation, “NELEGAL” operation to counter the illegal migration and human trafficking, “PROXY” operation to counter the crimes in the cyberspace, “NAYOMNIK” operation to prevent the possible involvement of the citizens of CSTO member states in the terrorist activities.

If we talk about the prospects, we are going to open a new direction next year – biosafety. There is already a decision to create a Coordinating Council for Biosafety of the authorized bodies of the CSTO member states under the Committee of Secretaries of Security Councils.

-It’s already several months the representatives of the Azerbaijani armed forces are located in the territory of Armenia, one of the member states of the CSTO. What is the organization’s stance on this fact? What actions will be taken to withdraw them from Armenia’s sovereign territory?

-We are concerned about the situation on the Armenian-Azerbaijani border and closely follow it. We think that the border disputes must be solved only through political and diplomatic means, and we support the agreements reached by the statement signed on November 26 this year to take steps to raise the level of security and stability on the Armenian-Azerbaijani border, create a bilateral commission with the support of Russia based on the application of the sides for the border delimitation and demarcation between Armenia and Azerbaijan.

It’s obvious that steps for de-escalating the situation are necessary more than ever and are of priority importance.

We support the Armenian government’s steps to solve the current situation through political and diplomatic means. We consider this the only way out.

In addition, it’s necessary to more actively use the opportunities of the OSCE Minsk Group Co-Chairmanship. Such approach will provide necessary preconditions for the solution of this problem.

-During the session of the CSTO Collective Security Council in Dushanbe, Armenian Prime Minister Nikol Pashinyan announced that the logic of developments of the situation in different parts of the Collective security has clearly showed the necessity of upgrading the crisis response mechanisms. He said that this will be formed in practice, also by ensuring the complete activity of the Crisis Response Center. What is your approach on this?

-The main idea of creating a Crisis Response Center is the optimization of anti-crisis decision-making algorithms in case of crisis in the CSTO responsibility zone, as well as the operational provision of technical, humanitarian aid, and information and political support.

Currently, the Crisis Response Center is operating, additional steps have been taken for its personnel strengthening.

According to the proposals of the leaders of the CSTO member states, an operational group has been additionally created in the Center in order to follow the military-political and strategic situation in the organization’s responsibility zone.

Trainings are being held aimed at improving the crises response mechanisms and raising the efficiency of the mutual partnership between the CSTO bodies. This year in October a joint practical game involving the operational groups of the concerned ministries and agencies of the CSTO member states took place. During the game they prepared the issues of preventing and solving the crisis situation in the territory of a conventional country, with the use of communication means, through the control points of the national bodies authorized to cooperate with the CSTO Crisis Response Center.

-During the recent Azerbaijani attack on Armenia’s eastern border on November 16, the Armenian lawmakers called for sending a CSTO observer mission and were expecting more decisive response from the organization. What could Armenia expect from the CSTO in case of such attacks?

-According to the CSTO statutory documents, the mechanism on responding to a crisis situation can be applied based on the official application of a member state, which is in crisis situation, and by the consent of all member states of the organization. In that case, consultations will be organized by the member states for providing necessary assistance.

In the case you mentioned, Yerevan put the focus on other mechanisms of solving the situation.

At the same time I want to note that after the escalation of the situation a CSTO operational group has been sent to Armenia to examine the situation, clarify the operational plans. That group involved representatives of the CSTO secretariat and operational headquarters. We think that this was very important and sufficient for the situation that time.

-After the recent meeting with the participation of the Russian President, the leaders of Armenia and Azerbaijan announced that they agreed to take actions to raise the level of stability and security on the border and move the process to creating a bilateral commission with Russia’s consulting participation for the start of border delimitation and demarcation. What possible role could the CSTO play on these works?

-As I said, we welcome the decision of the sides to start the border delimitation and demarcation. We consider it an important step to prevent the repetition of the current situation.

We think that in addition to Russia, other member states of the CSTO could also provide consulting support to this matter if necessary.

Moreover, if an application on CSTO’s engagement to these works is submitted, of course, it will be considered by the organization’s statutory bodies, and a respective decision will be made.

I also think that it’s necessary to move the agreements of the trilateral working group dealing with unblocking of transportation and economic communications to a practical domain. It will significantly contribute to the settlement of the situation and the increase of the level of stability in this region.

-Thank you for the interview.

11:29, 05.19.2022
2973 views U.S. recognizes role of population of Nagorno-Karabakh in deciding its future–Ambassador Tracy’s interview to ARMENPRESS