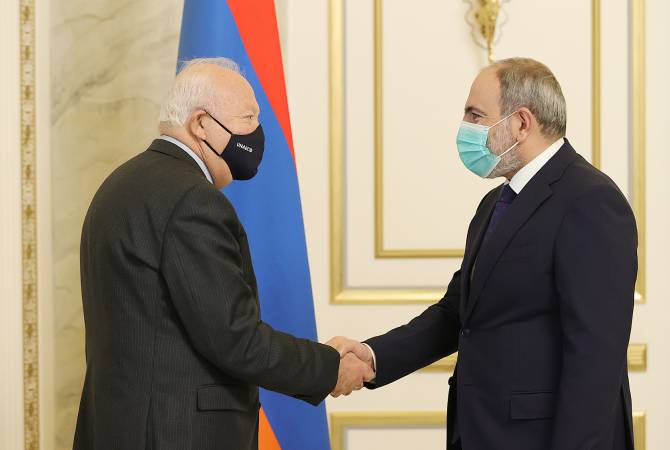 At the meeting PM Pashinyan said that this is the first such a high-level visit of the UNAOC to Armenia and expressed hope that this visit will contribute to the bilateral cooperation, as well as the dialogue between the nations of the region.

In turn the UN Under-Secretary-General presented the main activity directions of the UNAOC, highlighting Armenia’s role and participation to the activities of the Alliance. He said that the Alliance within its mandate is ready to contribute to the promotion of tolerance in the region, the inter-religious dialogue and preservation of religious sites.

In turn Nikol Pashinyan also attached importance to the steps aimed at promoting dialogue and tolerance in the region, at the same stressing the need for adequate response by the international community to Azerbaijan’s aggressive actions.

The PM drew the attention of his guest to the facts of destruction and distortion of Armenian historical-cultural and religious heritage in territories which have come under the Azerbaijani control as a result of the aggression against Artsakh, including the Azerbaijani actions against the St. Ghazanchetsots Church of Shushi and Dadivank monastery. Pashinyan highlighted the access of the UNESCO fact-finding mission to Nagorno Karabakh and adjacent regions, stating that Azerbaijan demonstrates unconstructive behavior also on this matter.

Pashinyan also emphasized the necessity of the activity of humanitarian mission of the Office of the UN High Commissioner for Refugees in Artsakh.