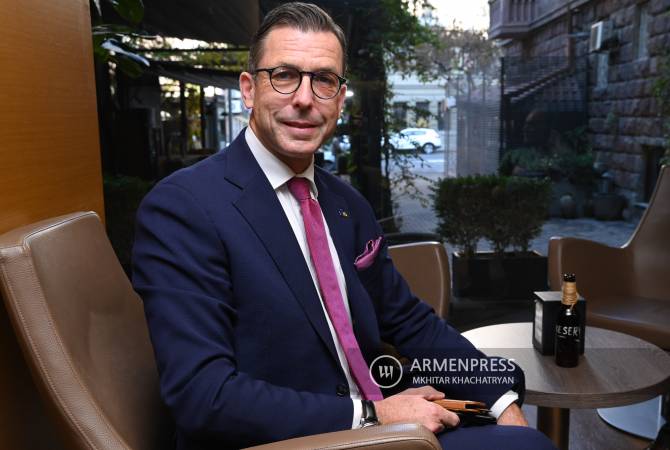 
YEREVAN, NOVEMBER 5, ARMENPRESS. Lars Patrick Berg, Member of the European Parliament, paid a private visit to Armenia this week and as a member of the European Parliament's Committee on Economic and Monetary Affairs, held meetings with Armenian parliamentarians, particularly  with Vahe Hakobyan, Chairman of the Standing Committee on Economic Affairs of the National Assembly of Armenia, and Arman Yeghoyan, Chairman of the Standing Committee on European Integration, ARMENPRESS reports Lars Patrick Berg told ARMENPRESS.

“Of course, this is not my first visit to Armenia, I have already been to Armenia. This visit of mine is private, I would like to exchange views with our Armenian partners on both economic and trade issues as well as strategic issues. In particular, I am interested in Armenia-EU economic relations”, the MEP said.

In that context, the MEP referred to the 2017 agreement between Armenia and the European Union, the Comprehensive and Enhanced Partnership Agreement, emphasizing that all parties in the European Parliament are interested in the implementation of this agreement, since Armenia, as a separate country and the region as a whole are important for the EU Member States not only in terms of economy but also geostrategy.

“Suffice it to say that Armenia has been a member of the Council of Europe since 2001, and that many events and programs have been implemented in Armenia over the past 20 years. Let's take the issue of the rule of law, judicial reforms, etc. And any other step in this direction that will deepen these developments should always be welcomed”, Lars Patrick Berg said.