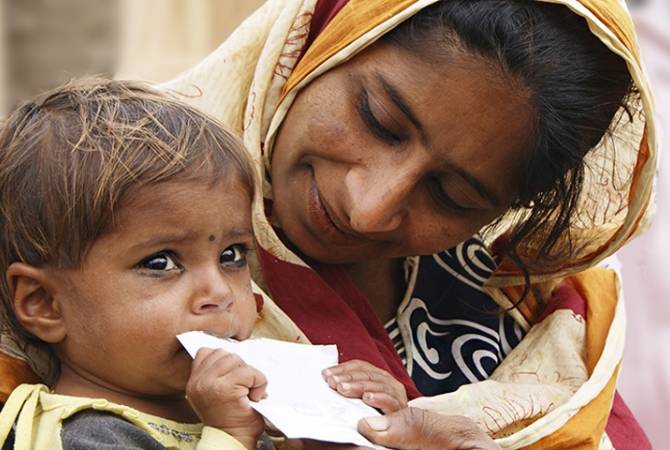 
YEREVAN, NOVEMBER 1, ARMENPRESS. The Aurora Humanitarian Initiative has announced the end of the nomination period for the seventh Aurora Prize for Awakening Humanity. Hundreds of people from across the globe have nominated 592 unique candidates. Nominations officially opened on April 24, 2021, the Armenian Genocide Remembrance Day, following the announcement of five 2021 Aurora Humanitarians, chosen by the Aurora Prize Selection Committee for their courage, commitment and impact. Overall, a total of 633 submissions have been received for the 2022 Aurora Prize, hailing from 62 countries including Armenia, Brazil, Czech Republic, Georgia, India, Nigeria, Pakistan, Rwanda, USA and Ukraine, the Aurora Humanitarian Initiative's press office said in a statement.

“As someone who has just been honored with the Aurora Prize, it makes me very happy to know that so many deserving candidates have been nominated this year. The Prize reflects a cycle of kindness that brings a message of peace, solidarity, and support to the world and, most importantly, to all these people who work around the clock. And now, they have a chance to be named the 2022 Aurora Prize Laureate and make an even bigger difference in the world,” said 2021 Aurora Prize Laureate Julienne Lusenge, co-founder of Women's Solidarity for Inclusive Peace and Development (SOFEPADI) and Fund for Congolese Women (FFC), whose outstanding work has been recently recognized at the Aurora Prize events in Venice, Italy.

Each nomination will now be carefully reviewed by a panel of professionals and experts in the humanitarian field. These specialists will prepare a shortlist of nominees who have demonstrated exceptional courage, commitment and impact. After that, the shortlist will be assessed by the Aurora Prize Selection Committee, who will select the 2022 Aurora Humanitarians and ultimately the Aurora Prize Laureate.

“In the midst of the dreadful challenges the world has faced over the past year and a half, extraordinary individuals such as the 2022 Aurora Prize nominees provide a source of inspiration and motivation in the selfless and courageous work they undertake. Alongside my fellow members of the Selection Committee, there is always much impassioned discussion and debate in selecting the Aurora Humanitarians and ultimately the Laureate, seeking to distinguish between so many remarkable acts of kindness, resilience and compassion. The process, however, is also most gratifying and a great privilege to be able to shine a light on some incredible, life-changing endeavours” noted Lord Ara Darzi, Chair of Aurora Prize Selection Committee and Co-Director of the Institute of Global Health Innovation at Imperial College London.

The names of the 2022 Aurora Humanitarians will be revealed on April 24, 2022, and the 2022 Aurora Prize for Awakening Humanity will be awarded on behalf of the survivors of Armenian Genocide and in gratitude to their saviors later in 2022.

The Aurora Humanitarian Initiative is a foundation that seeks to address on-the-ground humanitarian challenges around the world with the focus on helping the most destitute. Its mission is rooted in the Armenian history as the Initiative was founded on behalf of the survivors of the Armenian Genocide and in gratitude to their saviors and strives to transform this experience into a global movement.

All Aurora’s activities are based on the universal concept of Gratitude in Action. It implies that countless people around the world who have received aid in time of crisis can best express their gratitude by offering similar assistance to someone else. By involving Aurora supporters around the world, this will become a global endeavor that will snowball to expand the circle of saviors and most importantly – the number of those saved.

Addressing urgent humanitarian challenges, the Initiative provides a second chance to those who need it the most. True to its vision – “We believe that even in the darkest times, a brighter future is in the hands of those who are committed to giving others help and hope” – Aurora welcomes all who embrace this philosophy.

The Aurora Humanitarian Initiative is the vision of philanthropists Vartan Gregorian, Noubar Afeyan and Ruben Vardanyan who have been joined by thousands of supporters and partners. Aurora’s Chair, Dr. Tom Catena, draws on his experience as a surgeon, veteran, humanitarian and the 2017 Aurora Prize laureate to spread the message of Gratitude in Action to a global audience.

The Aurora Prize for Awakening Humanity is a global humanitarian award. Its mission is to recognize and support those who risk their own lives, health or freedom to save the lives, health or freedom of others suffering as a result of violent conflict, atrocity crimes or other major human rights violations. The Aurora Prize Laureate is selected based on the nominee’s demonstration of courage, commitment and impact.

On behalf of the survivors of the Armenian Genocide and in gratitude to their saviors, an Aurora Prize Laureate is honored with a US $1,000,000 award, which gives the Laureate a unique opportunity to continue the cycle of giving by supporting the organizations that help people in need.